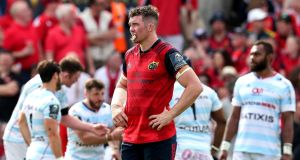 Munster’s Peter O’Mahony at Stade Chaban-Delmas in Bordeaux: “I am very proud of the way the lads showed up in the second half . . . but it was too much and too late.” Photograph: Billy Stickland/Inpho

This was Munster’s sixth semi-final defeat since last lifting the trophy in 2008, and for all the talk of learning lessons from such setbacks, some are becoming wearier of them than others. Having now played in four losing semi-finals, Peter O’Mahony falls into that category.

Asked to explain what he meant by getting tired of learning lessons, O’Mahony said: “I am tired of losing semi-finals.”

Reflecting back on the events of the day, O’Mahony was as candid as ever. “Look, we struggled in the first 30/35 minutes. We knew they’re very powerful when they get momentum and they come out of the trap and we failed to stop it. I didn’t think we defended them well enough and we lost a lot of collisions in the first 30 minutes, which ultimately cost us. I think when you’re going to cough up 21 points against a side of that quality in the space of 20 minutes, you’re going to put yourself on the back foot.

“They moved the ball as a result of us not winning collisions. As a result of that, they got momentum. They are very hard to stop when they get momentum. They’re big men, front-foot ball. With a pack and back line like that, they’re very hard to stop. We knew that, we spoke about that before and we failed to stop their momentum, and straight away you’re on the back foot with a team like that.”

“They put us under pressure,” said O’Mahony. “You need your set-piece going well. I thought our set-piece was quite good. The scrum was good, but we knew we were going to be in a serious competition with their lineout. They’re the best defensive lineout in the Top 14. They are hugely competitive in Europe as well. We knew we weren’t going to win all of them but they certainly got us there, definitely.”

Nor did O’Mahony give any credence to the notion that the travel schedule of late, 10 flights encompassing three away games in a row in South Africa and France, contributed to their sluggish start.

“I don’t think so. We certainly can’t blame any of that. You’re up against a very good side as well now. The quality of player they have is incredible, we know that. The difference going back to the Toulon game was we stopped their momentum-givers and, the first 30 minutes this time, we failed to do so. You’re going to be on the back foot from the off.”

CJ Stander echoed his captain’s view when he said: “I think we lost the collisions and just shorted our line and they took the ball wide, scored a few good tries. We didn’t give ourselves a chance in the first half. Every time we had the ball, we turned it over or we went to touch.”

Reflecting on his first European Champions Cup campaign, Munster head coach Johann van Graan said: “Firstly that this is an incredible competition. It really tests you. Like I said, the two Leicester battles, the Racing battle at the U Arena, the Castres game, the quarter-final and the semi-final, I think what I’ll take out of it is that small moments win big games. And unfortunately over the course of the 80 minutes we didn’t use all of our small moments.”

“I thought we had a willingness to play today,” added van Graan, “and if we were totally out-played and didn’t create opportunities, I’d be a worried man.”

“I’ve learned an incredible lot about myself and the coaching team, the players, the management and the club, and maybe just a word to all those supporters: we couldn’t ask for anything more and the players give their all, but unfortunately we just came up short.”