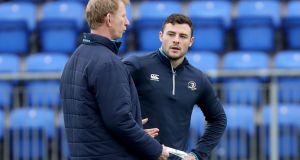 Robbie Henshaw returns to the Leinster side for Saturday’s Champions Cup clash with the Scarlets. Photograph: Bryan Keane/Inpho

Robbie Henshaw returns from injury to start for Leinster in Saturday’s Champions Cup semi-final clash against the Scarlets (3.15).

Henshaw injured his shoulder during Ireland’s Six Nations romp over Italy at the Aviva Stadium, and returns to the fold on the same stage.

As a result his midfield partnership with Garry Ringrose can resume - while Isa Nacewa, Rob Kearney and Fergus McFadden form an experienced back three.

Cian Healy, Sean Cronin and Tadhg Furlong start in the frontrow, with Devin Toner and James Ryan in the engine room.

Jack Conan and Jordan Larmous both earn places among the replacements.