Gerry Thornley: The Irish home and away are good for Europe

They turn up in big numbers, as this weekend’s Champions Cup semi-finals will show 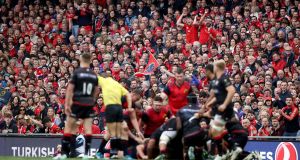 Munster hosted Saracens in Dublin and Clermont were at home to Leinster in Lyon in last year’s Champion Cup semi-finals, when more than 91,000 attended the two games. Photograph: Dan Sheridan/Inpho

Following on from the failure of any Irish side to reach the quarter-finals of the Champions Cup two seasons ago, at last season’s launch tournament organisers made no bones about expressing their desire to have them dining at European rugby’s top table again. They weren’t kidding, and with good reason.

The Irish are good for the European Cup. They provide colour. They turn up, both at home and away games, in the biggest numbers, with their only real rival being Clermont Auvergne. The tournament has, relatively speaking, a bigger cache for Irish sports fans. The media coverage is altogether more intense.

The total for the four quarter-finals two seasons ago was around 68,000, compared to 89,000 the year before when the Leinster-Bath quarter-final at the Aviva Stadium accounted for almost half that tally. Last season, with Leinster and Munster back in the quarter-finals, their two ties attracted crowds of 76,000-plus, thus swelling the aggregate total over the four games to 110,000. There was a similar hike in the semi-finals when Munster hosted Saracens in Dublin and Clermont were at home to Leinster in Lyon, when over 91,000 attended the two games, up from that modest tally of under 39,000 the previous year.

Another reason for the organisers’ relief at having Irish teams back in the knock-out stages is that, unlike the quarter-finals, the EPCR keep all the gate receipts from the semi-finals. With 45,000 tickets sold for Saturday’s semi-final in the Aviva between Leinster and the Scarlets, it is on course for being a 50,000-plus sell-out. This never happens anywhere else.

Strictly speaking, the semi-finals are EPCR’s to market and sell as well, but Leinster’s ability to shift 30,000 or so tickets through their own supporters, clubs, sponsors and so forth, gave Saturday’s match a significant push. Now, with a near sell-out, EPCR should pocket something in the region of €2 million in gate receipts. No wonder they like having the Irish dining again at the top table.

Indeed, it is one of the ironies of this weekend’s semi-finals that not only will Munster bring more support to their semi-final against Racing 92 in Bordeaux, but so too the Scarlets will bring a bigger travelling support to Dublin than the Parisian club will on Sunday. In other words, the team with the least support in the semi-finals will be the sole French team, which are playing in France.

Why is it that the Irish have a greater affinity with the European Cup, be it in its previous guise as the Heineken Cup or as the Champions Cup, than the English or French?

That the Heineken Cup has been around longer than the Pro14 is assuredly a major factor. Previously the Celtic League, Magners League, RaboDirect League and Guinness Pro12, the Pro14 has had an ever-changing, troubled and lesser history. Remember, there were nine Welsh sides in its inaugural season of the League in 2001-02, which was salvaged by a final between Leinster and Munster at the old Lansdowne Road. By contrast, the European Cup came into existence six seasons previously.

However, the Top 14 has a history and tradition which not even the Premiership can buy, much less the Pro14 or for that matter the European Cup. The first final of the French Championship dates all the way back to 1892. Save for five years during the first World War, and three during the second World War, French clubs have been competing for the cherished Bouclier de Brennus ever since 1892.

When Trevor Brennan joined Toulouse in 2002, famously he was given an understanding of the bouclier’s importance in the French rugby psyche by team-mate Christian Labit. After winning the bouclier in 2001 with Toulouse, Labit had been given permission to borrow the vast shield for a couple of days, and wrapped it in rugs in his car boot. He drove to Toulon, where his father, an ex-sailor, lived. He brought his father out to the car, opened the bonnet and unfurled the rugs. A few tears streamed down his father’s face. It was, said Labit, the first time he had seen his father cry.

Nope, nothing can buy that, and it’s safe to say that it will be a very long time, if ever, that any other rugby trophy in Europe can match that kind of mystique. Still, the European Cup is getting there, and in the Irish psyche – outside of the Test arena – it is pre-eminent.

As an aside, there have been some bleatings from across the water about Leinster playing Saturday’s semi-final in the Aviva Stadium, and yes, it means they have home city as well as home country advantage.

But this was true of Toulouse when they hosted Perpignan in 2003 and Leinster in 2010 in the Stade Municipal, and of Leicester when they were at home to the Scarlets at the Walkers Stadium in 2007 and of Cardiff when they hosted Leicester at the Millennium Stadium in 2009; the same year Munster “hosted” Leinster in Croke Park and 82,208, so ensuring a record 126,420 at the two semi-finals. Not entirely dissimilarly, Saracens (three times) have hosted semi-finals in London, as did London Irish once.

Lansdowne Road/Aviva Stadium is where Ulster and Munster have hosted semi-finals too. Eh, there’s nowhere else, and at least the stadium will be full!