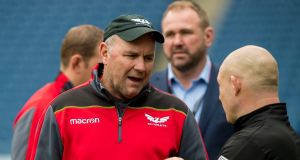 Scarlets head coach Wayne Pivac has said he has no problem with the venue for their Champions Cup semi-final against Leinster. Photo: Craig Watson/Inpho

Leinster have home country advantage, with the Aviva Stadium venue designated by tournament organisers European Professional Club Rugby being barely half a mile away from their normal RDS home ground.

It has raised eyebrows in some quarters, but Pivac said: “We have worked really hard to get to the semi-final, and to be quite honest, wherever we played it, it was never going to bother us.

“That is for other people to decide — what is neutral and what is not.

“It is a magnificent stadium, in terms of your preparation, changing rooms and everything is international standard.

“The location of the stadium as a neutral venue? Look, there will be plenty of support for the locals I am sure, they won’t have too far to travel, but I know one Scarlets supporter probably makes up for 10 of the opposition.

“Hopefully, there will be something like 5,000 Scarlets fans there by the sounds of it, which is a great number of travelling supporters. I don’t know if it will be the cauldron that some people think.

“For us, it is a semi-final, it is an opportunity, it is 80 minutes away from creating history. That is the way we are approaching it.”

The Llanelli-based Scarlets contest a first European semi-final since 2007, while three-time European champions Leinster — despite being drawn in a group that also featured Exeter, Montpellier and Glasgow — won all six games and collected 27 points from a possible 30.

They then knocked out Saracens at the quarter-final stage, and led by Ireland fly-half talisman Johnny Sexton, Leinster start as favourites against a side that beat them in last season’s PRO12 play-offs on route to winning the title.

Asked how the Scarlets might stop Sexton running the game, Pivac joked: “Hopefully he gets the flu or something between now and then.

“He is quality, isn’t he. We put a lot of pressure on him last year, and had some success. So I guess it is no secret that all teams will try and put some pressure, bring some line-speed.

“But he is one player, and I think if you focus on one player it can free up space for others. He is just one of 15 that we are going to have to keep an eye on and be very, very good defensively.”

The Scarlets recovered from a poor start in Europe to end their pool fixtures by beating Bath and Toulon, then saw off quarter-final opponents La Rochelle.

All three of the Scarlets’ previous European semi-finals ended in defeat, yet they have shown under Pivac that big games do not faze them.

After knocking out PRO12 semi-final opponents Leinster at the RDS last May, they returned to the Irish capital a week later and destroyed Aviva Stadium opponents Munster.

“We can certainly take a lot of confidence out of the fact we went to Ireland two weeks in a row, with one of those games at the Aviva,” Pivac added.

“They are unbeaten in the competition, and to do that home and away against the quality of their pool shows the strength of their squad.

“Leinster are the form horse, and we are going to have to have probably our best performance so far as a group.”