What we learned from the Champions Cup weekend

Scott Fardy and best laid plans, Racing opt to chop not choke, and rugby at what cost? 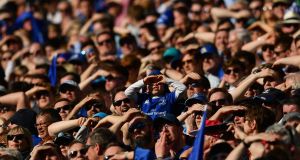 Leinster’s signing of Australian international Scott Fardy as a locked in secondrow player has shown how the best laid plans often never turn out that way. The mantra when Fardy arrived was that he was strictly signed as a secondrow as Leinster had a succession of quality backrow players queuing up. After the unforeseen retirement of former Irish captain Jamie Heaslip and the long term injury to Josh van der Flier and now Sean O’Brien and the shorter term injury to Jack Conan, Fardy’s job spec has changed and changed for the good. After his man of the match performance against Scarlets in the backrow, Fardy, who during the build up to Saturday’s game was determined not to talk about Heineken Cup winning Rocky Elsom, has become another Australian shaping Leinster’s season. If Leinster can go all the way, they will have a had a few misses but also some big hits - Felipe Contepomi, Brad Thorn, Elsom - with regard to the players they select for their overseas policy.

Racing saw and realised the threat Munster had with their ball carriers and may even recall Johnny Sexton’s drop goal against some of them in the Six Nations Championship when Ireland beat France after 41 recycles in the dying minutes of the match. So the chop tackle was used to great effect by the French team players against Munster’s yard makers in the pack and the likes of Sam Arnold who sometimes plays like an auxiliary forward. It was probably one of the quietest games Munster number eight CJ Stander has had for some time offensively. His peeling off rucks, mauls and scrums has been a feature of Munster and Ireland play. But Stander and the rest of the players were taken low and hard by the Racing players, who fell back into old style tactics of making the hits around the ankles count. It worked. Racing blunt force as much as their cutting edge was the undoing of Munster. Chop not choke.

One of the aspects of Munster’s defeat that Leinster players, especially Johnny Sexton, can learn from moving towards the final next month in Spain is where to kick the ball on the pitch. In the opening half, where Munster effectively lost their semi-final with Racing, too many territorial kicks were landing in the arms of the athletic number eight Yannick Nyanga. It was therefore no surprise that the French international, who needs no invitation to run with the ball with space in front of him, was one of Racing’s best players in the opening 40 minutes. His returns and mobility around the pitch set in motion Racing counter attacks with Teddy Thomas alert to every space near his right wing. Lesson number one is don’t kick to one of the most explosive runners on the pitch.

It is a tough one to call and is no disrespect to any of the players in Munster. Johann van Graan’s team may well go on and win the Pro 14 league championship and nobody will blink. But Munster need more players of the calibre of Murray, Stander and O’Mahony. Their injury problems were well aired before the game and they went on to beat Toulon giving hope that Munster are what Munster do. But they need to recruit more quality international level players, who have played against strike runners like Teddy Thomas and Yannick Nyanga and Fijian Leone Nakarawa and even Dan Carter, who came off the Racing bench. How Racing scored in those opening minutes came down to experience, confidence seeing where Munster were vulnerable and having done it before many times in their careers. The Munster backline had 147 Irish caps and 131 of those belonged to Conor Murray and Keith Earls. The Leinster backline had 237 caps across six starting players, Jamison Gibson Park the odd man out.

Rugby at what cost

The European Cup organisers EPRC need to think about fans more often. Bilbao and the 53,000-seater San Mamés Stadium is a fascinating place to have a final and it evangelises the game as it is not one of the traditional rugby strongholds. But at what cost. The huge prices which we have all come to expect in a world of supply and demand make it off limits for most people. It is not an easy city to access cheaply from France or Spain.

A Friday return on Sunday is €800 and a two night stay in a one star hotel half an hour away by taxi a further €500. First up Ireland are Premiership standard when it comes to price hikes for big events so it is not just a Spanish issue. Leinster also take it as kindly humour when they are accused of being the elite metropolitans. But now that they are being asked to pay for the joke they may not find it so funny.