Playing at home is a massive advantage as Leinster, Munster and Connacht go forth 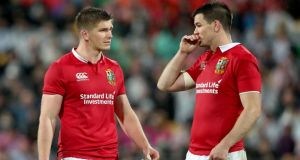 Johnny Sexton and Owen Farrell, those uber competitive international rivals and two-time Lions team-mates, will both be making their 60th appearances in the competition. Photograph: Dan Sheridan/Inpho

Plenty of water has passed under the bridge since the quarter-final line-up for the European Champions Cup was finalised on the third weekend in January – a virtual river full. The Six Nations has been and gone, and the rescheduling of the tournament at the behest of the Anglo-French club alliance, means that to all intents and purposes none of the quarter-finalists have had much in the way of a full run-out in the intervening two months.

If the quarter-finals appeared to provide choppy waters for the three Irish survivors then, that is even more the case now. That said, all earned home ties, and no less than the Six Nations, history has shown us that home advantage can be very significant at this juncture, with three in four (or 77 per cent to be precise) being won by the hosts. Granted, the odds favour at least one away side winning too.

Underlining how they know how to navigate their way through the pool stages better than anyone, Munster will be hosting their tenth home quarter-final – a tournament record. They have won eight of the previous nine, the exception being their defeat to Ulster in 2012.

Leinster have earned home quarter-finals on six previous occasions, progressing to the semi-finals in all but one occasion, namely when losing to Leicester in 2005.

Although Clermont have never won the trophy, their tie against Racing on Sunday at the Stade Marcel Michelin is their ninth appearance in the last eight, and they have won all four home quarter-finals to date.

Despite having a less numerous contingent in Ireland’s Grand Slam than Leinster, it looks as if Munster paid a heavier price. As usual, Toulon remained relatively untroubled by the Six Nations, although they did welcome back Mathieu Bastareaud, again offloading brilliantly, to lead the side, as well as Anthony Belleau, for Sunday’s 49-0 thrashing of Clermont.

The meeting of Leinster and Saracens is festooned with Lions, and Johnny Sexton and Owen Farrell, those uber competitive international rivals and two-time Lions team-mates, will both be making their 60th appearances in the competition.

The contrast in game management between the Irish provinces and the English clubs was graphically illustrated in the way Mark McCall wasted no time in swiftly restoring six of Saracens’ eight-strong contingent who were involved in Six Nations, whereas Leinster rested seven of the Ireland team that started the Grand Slam coronation in Twickenham.

Saracens did end a run of two successive defeats at home to Leicester and away to Exeter by beating Harlequins 24-11 when again breaking new ground by hosting the Premiership’s first game at the London Olympic Stadium. The win also elevated them back to second in their domestic table.

Liam Williams and Maro Itoje scored the tries – the first instigated by the in-form Scottish winger Sean Maitland as Saracens scored their 11th try of the Premiership season in the opening ten minutes. After beating two tackles to gallop in from outside the 22, Itoje celebrated by holding his hands up to the side of his face as if to signal he was having “a rest”, a cheeky riposte to those who reckon he looks jaded.

That said, Mako Vunipola was on the bench and the injured duo of Owen Farrell and George Kruis are expected to return this week. Hence, having squeezed into the quarter-finals as the third best runners-up, Saracens will arrive in Dublin locked and fully loaded, and with a whiff of cordite in the nostrils of those England players who watched an Ireland team bulk supplied by Leinster sealing the Slam at Twickenham last Saturday week.

Saturday’s defeat to the Ospreys was disappointing, but if you could handpick a Leinster defeat this season, this was probably the one.

It will, as Leo Cullen said, provide a reality check for the whole organisation, and coming a week after Ireland’s Slam and a week before hosting Saracens, that may have its benefits. It will further sharpen their minds.

By contrast, the Scarlets-La Rochelle tie has an intriguing novelty value in a first ever meeting. You’d have got long odds on the Scarlets reaching the quarter-finals, much less hosting one, when they lost their opening two matches and trailed 14-man Benetton until the latter stages in round three.

As for Connacht, their ability to scale the heights and plumb the depths continued with their defeat at home to Edinburgh. Now they must beat Gloucester for the first time in four attempts, one of the previous three defeats being a 40-32 defeat after extra-time in a European Champions Cup qualifying play-off tie in May 2015 when a controversial late decision by Romain Poite denied Connacht a win.

A tad unnervingly, Poite is the referee again next Saturday. But no less than Munster and Leinster, Connacht’s season hinges on this one.