Gerry Thornley: Leinster and Munster riding the crest of a wave 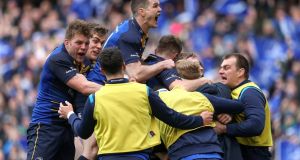 The season that keeps on giving shows no signs of abating.

For Leinster and Munster to both reach the semi-finals in the same campaign for the sixth time in the history of the European Cup is a phenomenal achievement, all the more so when one considers the millionaire backers Saracens have, and the multi-millionaire benefactor behind Toulon.

In evicting the combined winners for the last five years running, Munster and Leinster demonstrated that money can’t always buy you everything, not when opposed by largely home-grown, inspired, well-coached sides playing in front of their own supporters.

Munster had to dig deeper, while the sheer quality of Leinster’s passing, offloading, running and recycling, as well as their unquenchable appetite in defence, was again a joy to watch.

Three tries to one left no room for argument, and the greater variety of Leinster’s attacking game was demonstrated in those scores; brilliantly outflanking Saracens from deep with support runners galore, the Dan Leavy-James Ryan interchange and after another searing break by Leavy, the remorseless recycling and determination which led to James Lowe’s try.

Leavy’s form has been such that neither Ireland nor Leinster have missed the world-class Seán O’Brien, which says it all. If O’Brien returns in the next two weeks, one imagines he would have to be accommodated, but if the day comes to pass that Joe Schmidt has to perm three from O’Brien, Leavy, CJ Stander and Peter O’Mahony, he’s going to have some headache.

Granted, one season can often prove a snapshot in history, all the more so in a post-Lions series where the more sympathetic game management of the Irish system as stands in contrast to the harsher demands in England. Apart from Owen Farrell and Mako Vunipola, it’s hard to think of too many English Lions who have been able to sustain their form through the season, but most should come back more refreshed if, as Eddie Jones has hinted, they are rested from the summer tour of South Africa.

Even so, following on from England’s fifth-placed finish in the Six Nations, this will be the first time since 2012 that no Premiership team will feature in the semi-finals. Meantime, the Celts filled the top three places and now provide three of the four semi-finalists in the European Cup.

There is also a delicious irony in that Stuart Lancaster and Andy Farrell have been such key figures in sharpening Leinster’s running game and Ireland’s defence after carrying the can for England’s World Cup pool exit.

Leinster have looked the best team in the competition, and to that end have acquired a truly exceptional list of scalps. Following on from home and away wins over the leaders of the Top 14, the leaders of the Premiership and the runaway leaders of Conference A in the Pro14, they have just dethroned the back-to-back champions.

They are unbackable now as 8/15 favourites to win the trophy for a fourth time, and this competition does have a habit of producing deserving champions, be it Saracens lately, Toulon before them and similarly Leinster, Munster, Toulouse, Wasps et al in their pomp.

Against that, Racing and Dan Carter will desperately want to tick the last box on his career CV in the final season of a multi-decorated career. Similarly, Wayne Pivac’s Scarlets are on as much of a mission as Leinster and Munster.

The respective records of Leinster and Munster in the semi-finals up to now also demonstrates how much tougher it becomes from here on. Leinster have won three out of nine, while Munster have won four out of 12.

A tad ominously, on the three previous occasions both reached the semi-finals and were in opposite halves of the draw, they both lost – in 2003, 2010 and last season.

Leinster have won three and lost six semi-finals to date, and even their record at Lansdowne Road is two wins and three losses. Munster have a phenomenal, unparalleled record in the quarter-finals, reaching that stage 17 times, and that is in the last 20 years. They have now won 13 out of those 17 ties, thanks in large part to negotiating their way through the treacherous pool stages with sufficient points to earn ten home quarter-finals at Thomond Park, where they have won nine of them.

The flip side of this coin is that both teams are even more powerfully motivated for losing at the same stage last season, not to mention the new breed who witnessed the cup triumphs of their boyhood heroes from 2006 to 2012, and now want to emulate them. Leinster have already learned one lesson. Last season’s concluding pool draw in Castres ultimately cost them a home semi-final, whereas the win in Montpellier and a top seeding has effectively earned them one this time.

Amid this springtime for Leinster, Munster and Ireland, there are caveats. Connacht’s season looks to have come to a premature end after losing a winnable Challenge Cup quarter-final at home to Gloucester, while Ulster look like they can’t wait for their season to end.

For Munster and Leinster though, their season has been given added momentum. There’s no telling what it still might bring.

1 Nicholas Quinn: ‘Swimming became how I dealt with grief’
2 A beautiful, happy accident - Moneyball is the best sports movie ever
3 James McClean still failing to learn his own online history lesson
4 Ian O’Riordan: The aloneness of the long-distance rider
5 Karen Robinson Walton: I am looking at him. I say ‘Benjamin, what have we done?’
Real news has value SUBSCRIBE