Gerry Thornley: Has Pro 14 bitten off more than it can chew by expanding? 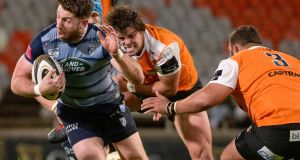 Cardiff Blues’ Alex Cuthbert in action against the Toyota Cheetahs at Toyota Stadium in Bloemfontein. The Welsh side endured a nightmare 55-hour journey to South Africa. Photograph: Frikkie Kapp/Inpho/BackPagePix

The brave new dawn of an expanded Pro 14 began with misgivings and specifically the logistical difficulties for the Celtic and Italian sides in negotiating away games.

Due to the travelling distance from Europe, it was decided that games in South Africa would be played on Saturdays, allowing visiting teams to have a seven-day turnaround between fixtures and include five ‘clean days’ that did not involve any travel. For those European teams obliged to play both South African teams away, the schedule was configured so that they would be played back-to-back across two weeks, acting as a ‘mini-tour’.

This all sounded grand in theory, but from the outset there were teething problems. Leinster, their travel plans re-arranged at the organisers’ behest, were obliged to travel in two separate groups, with Isa Nacewa and Jamison Gibson-Park forced to return to Dublin to obtain visas from the South African embassy, so missing the first game against the Kings before linking up with the remainder of the squad for the Cheetahs game.

This was mild by comparison to Scott Baldwin missing the Ospreys game against the Cheetahs a week later after seeking to pat a lion, and being bitten for his troubles.

But Leinster’s travelling difficulties were as nothing compared to the horrific trek which the Cardiff Blues squad and their support staff underwent last week in readiness for the first game of their mini tour against the Cheetahs. They finally touched down in Bloemfontein after a nightmare 55-hour journey from the UK ahead of their encounter with the Cheetahs last Saturday.

The squad were originally due to fly out to Johannesburg from Heathrow at 9pm on Wednesday night, and then get a connecting flight to Bloemfontein. But their flight out of Heathrow was delayed first by an hour, and then by a further 20 hours.

After spending the night in a Heathrow hotel, they eventually flew at 5pm on Thursday, but this meant they missed their connecting flight to Bloemfontein. A fresh connection was arranged for early on Friday morning, only for them to suffer a further three-hour delay due to a faulty radar, obliging them to disembark their plane and spend more than two hours in the terminal, then back onto a bus and then around 40 minutes on the plane on the runway due to further delays.

They eventually arrived just over 20 hours before the scheduled 2pm kick-off (BST) at the Toyota Stadium on Saturday, and so the game was pushed back to 5.15pm. Even on arrival, they discovered that their kit bags had not landed with them.

This was a key game for both sides in the battle for third place and the final Pro 14 playoff spot. The Cheetahs went into the game in third place on 52 points, five above the Blues in fourth on 47 points.

Cardiff were leading by 27-22 as the game passed the 80-minute mark, and thus were on course to trim the gap between the sides in the Conference A table to just two points.

Cardiff had been reduced to 14 men in the 78th minute when Scottish referee Mike Adamson seemed set to award a penalty after Alex Cuthbert knocked on when seeking to make an intercept, before South African TMO Johan Geeffe intervened to look at the replay, whereupon Cuthbert was sin-binned.

The Cheetahs’ scrum dominance was eventually rewarded with a penalty try – so completing a 15-9 penalty count in favour of the home side which at times appeared to leave the Blues players bemused – in the 88th minute. This also earned the Cheetahs a bonus-point win, which meant they pulled seven points clear of Cardiff in third place with just two games remaining.

Their standing has largely been due to their home form, with eight wins out of nine, as against their away form of three wins and seven defeats.

A bit like Cardiff’s horrendous journey, the match itself went on way too long and culminated unsatisfactorily. Certainly the manner in which Cardiff’s eight-game winning run in two competitions was brought to an end must have left a decidedly bitter taste in the mouth for Danny Wilson and his Blues players.

Kieran Keane and his Connacht players will have an idea how they felt. Typical of their wildly inconsistent season, Connacht had played some high-class attacking rugby on the dry track at the Toyota Stadium a month ago to outscore the Cheetahs by three tries to two.

They led 25-23 entering the last play of the game when the second of two late penalties against them by South African referee Stuart Berry, heading up a team of officials comprised entirely from the SARU, led to the Cheetahs’ Niel Marais kicking his fourth penalty of the match to secure victory. It was for collapsing a maul, but it looked a debatable decision. The penalty count was 13-7 in favour of the Cheetahs.

The hasty inclusion of the two South African franchises weeks before the Pro 14 kicked off was presumably in part based on the money injection they would give the competition. There are all sorts of financial as well as logistical difficulties in overseeing a competition with participants from five different countries but if the Pro 14 organisers are serious about achieving the highest of standards in this professional era, then incurring the cost of appointing match officials from neutral countries would be a step in the right direction.

For their part, Leinster can at least be grateful for having their South African mini-tour over and done with, whereas Munster’s back-to-back odyssey hardly looks ideal preparation for their European Champions Cup semi-final against Racing in Bordeaux.

Against that, supplementing the entire 23-man squad who were involved in their epic win over Toulon is making the best of it, maintaining the close-knit spirit which was such a key component to that quarter-final victory. It looks a shrewd move.

In any event, the Cardiff Blues’ experience last week should also act as a salutary warning when it comes to considering further expansion of the tournament, whether with a mooted American team or whomever.