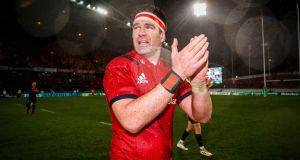 On horrendous nights such as these, the ball becomes a liability, not least when it comes to lineout time. The hooker’s throw is one of the most difficult skills in the game and when a near gale force wind starts making it deviate it from its course and increasingly restrict the call to ball at the front, the opposition’s defensive lineout becomes very interested.

By the 74th minute, Munster were reduced to calling a four-man lineout and setting up a fake “pod” when lifting Peter O’Mahony as a decoy as, instead, Billy Holland veered around the front for Niall Scannell to hit him at waist height the bare five metres infield and deny Maro Itoje and his compadres a chance to contest for the ball.

It may have looked a tad desperate, a little silly even, but creating an uncontested waist-high ball in these conditions was actually ingenious. Hence it was recorded as one of the 10 lineouts Munster retained off their dozen throws, while pinching four of Saracens’ 13.

Unusually, almost every throw was contested, making the lineout the key battle within the war, with Munster captain O’Mahony a key figure.

“I suppose you enjoy the lineout defensive side when it’s going well but it’s difficult for both teams out there today,” said O’Mahony afterwards. “That weather, it makes the 10 yards that you have to work with feel very small, especially when you’re trying to attack against guys like Maro and Will [Skelton], with their ability to defend. You know, guys like [Nick] Isiekwe, they’re quality, quality lineout operators so that 10 metres seems quite small when the weather’s that bad.”

O’Mahony, as ever, was the destroyer-in-chief on the Saracens throw but he gave most of the credit to Holland.

“We knew how important that set-piece is for them, like us, that lineout is, and the amount of work that Billy does, lineout-wise, is something that doesn’t go unnoticed by us. Obviously you don’t see how much work he puts in and that paid off tonight along with the weather making it difficult for everyone.”

In the heel of the hunt, Mark McCall admitted: “Fair play to Munster, their defensive lineout probably won them the game.”

It sure did at the very end, when O’Mahony and John Ryan lifted Jack O’Donoghue into the air to pinch Jack Singleton’s throw cleanly. Again, O’Mahony gave Holland – the one other starting Munster forward still there at the end – much of the credit.

“To be fair, Billy probably took control. He spoke about our lineout defence, what our plan was and you just go back to your process. It’s another lineout, another set-piece, it’s a very important one but that’s what you have to do. You’ve just got to be switched on and to be fair to Jack he was spot on with whoever was lifting him. It was a good outcome for us.”

“I’m lucky I can fall back on a superb leadership group that we have built over the years and guys like Billy, I don’t know how many caps he has for Munster at this stage, you know the experience that he has. Guys like Earlsie and Mur, guys I can fall back on and trust that they know what the craic is to give direction when sometimes I’m not there mentally at the time a little bit. He [Holland] was over at that stage and spoke to us and talked us through the process.”

As for O’Donoghue, one of the few who was surprisingly overlooked for the expanded World Cup squad, O’Mahony said: “Jack has been around a long time now, he seems like a young fella but we were only having this discussion yesterday, he’s been playing in a Munster jersey for about seven years now, which is a long time. He’s an incredibly important part of the squad.”

“He’s second to none, lineout-wise. He’s one of the best lineout operators/jumpers I’ve come across – very diligent, professional, a great guy to have in the squad. I don’t think he’s had a poor performance in a long, long time. He shows up week in, week out. A great fella to play alongside.”