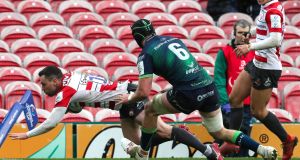 Tom Marshall dives to score for Gloucester in their win over Connacht. Photograph: Billy Stickland/Inpho

Sunday was another frustrating outing in England for Connacht as hopes of Andy Friend’s side progressing to the Champions Cup quarter-finals now hang in the balance.

The 26-17 defeat to Gloucester at Kingsholm was the latest in a decade of losses in England, and the manner of it frustrating for the lack of clinical execution that Friend has come to expect from his squad. Yet, he remains confident his side will make that breakthrough.

“We will get there. We will do it,” he says. “This is just another occasion that we are walking away without the win and we will keep our belief and get there.

“Last year we had a 58-year curse of Connacht not winning in Ulster and we did. It’ll break. All those things change and we will win. It just wasn’t today.”

Connacht, having arrived in Gloucester boosted with the return of World Cup players Bundee Aki and Jack Carty – two of quintet who last played Gloucester in a 28-33 loss at the Sportsground in 2018 – had high hopes of claiming a first win over the West Country side in six outings. They kept pace in the first half, taking a 10-7 lead, but any hopes dissipated in a second half which was controlled for the most part by Johan Ackermann’s Gloucester.

“It’s our execution. We worked so hard, incredibly hard. I’m so proud of that effort, but it’s our execution when it matters. We are gifting too much ball to the opposition and that’s really frustrating. We need to look after that footy and put pressure on the opposition rather than ourselves,” says Friend. Now Connacht have to face the English outfit in the return fixture at the Sportsground next Saturday, and they will likely be without backrow Colby Fainga’a who limped off with a knee injury, adding to the list of injuries that include prop Paddy McAllister, locks Gavin Thornbury and Cillian Gallagher, and fullbacks Tiernan O’Halloran, Darragh Leader, and Stepehn Fitzgerald.

“We’re working off three secondrowers and we’ve got to manage those men too. When you have only got three fit and available for you, they are getting every rep in training as well.

“You can wear them out if you are not careful, so it is just how we manage those things as well. We want to be winning in the Sportsground, there’s no doubt about that. It’s a game we want to win, and I still feel if everything goes our way, we can still get our out of this pool.”

That John Porch grabbed an opening try was a positive for Connacht – making his debut at fullback. “That’s his first time playing fullback in probably four years. With every game he plays he gets better. He’s an instinctive footballer and he gives you everything he has got.

“I think everyone is just looking forward to being at the Sportsground now for such a massive battle. We saw how much the Gloucester crowd contributed, they were loud and enthusiastic, and I can’t wait for them to experience the Sportsground and be on the other end of it next week.”

This was always going to be a testing battle, particularly up front where Gloucester boasted world cup winner Franco Mostert, and fellow South African Gerbrandt Grobler, and the tenacious Ruam Ackermann, but in an error-ridden game, Connacht were the worst offenders Connacht had taken a 10-7 lead into the break, thanks to Porch’s early try and some super work by the Connacht pack at the breakdown, but it belied the danger and determination of the hosts who were desperate to break a run of five defeats in both Europe and the English Premiership.

The industrious Gloucester scrumhalf Josh Simpson provided his side with momentum from a clever chip over the top, and it paved the way for the game’s opening try two minutes later when fullback Tom Marshall took advantage of a stretched cover to touch down, with Danny Cipriani converting for a 7-0 lead.

However, Connacht made their first foray into the Gloucester 22 count after stealing a lineout. Aki made his presence count, taking three players out, before Caolin Blade found Carty, who produced the perfect pass over the top to Porch, who broke from the 22 to score. Carty added the extras to level matters.

It was the boost Connacht needed. Excellent kicking from Carty kept the home side pinned in their own half, and when they strayed offside, the Ireland outhalf added the three points to put Connacht into a 7-10 lead.

The turning point came after the break when Danny Cipirani intercepted a pass from Carty, before the supporting Louis Rees-Zammit claimed Gloucester’s second try, which Cipriani converted for a 14-10 lead.

A yellow card for Godwin put Connacht under all sorts of pressure before fullback Tom Marshall took advantage of the extra man to bag his second try for a 19-10 lead. Minutes later Jake Polledri burst through from a lineout untouched. Late in the game Connacht camped on the Gloucester line, and eventually Quinn Roux scored a consolation effort on the final whistle.

Replacements: T Gleave. K Hohneck, J Ford-Robinson, L Ludlow for Ackermann, and A Craig for Mostert (both 65m), C Braley for Simposon (66m), B Twelvetrees for Harris (70m), M Banahan for Cppriani and T Gleave for Marais (both 72), J Ford-Robinson for Ruskin (73).