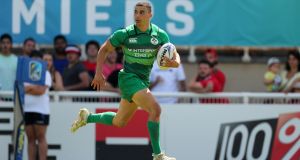 Tullamore’s Jordan Conroy became the first player to score five tries in a Sevens World Series tournament, since 2010, when he helped Ireland to a 31-29 victory over Scotland in their final pool match in Dubai. Mark Roche kicked the match-winning conversion to give the Irish team their first ever win in the elite series.

Speaking to Irishrugby.ie afterwards Conroy said: “It was great, there was a massive Irish support out there. It was absolutely amazing scoring each try. Scoring five, I didn’t think I had it in me but it felt great. I think I left my legs out there but it was amazing.

“What a way to score five tries and to get the last winning try felt pretty good. It put the team in a really good mood and the morale has certainly been lifted in there. All the lads are feeling good after that.”

Anthony Eddy’s team had lost their previous pool matches 24-19 to the USA and 45-21 to Australia and in the final match, against Spain, went down 19-14 to finish in 12th place overall. Conroy, having also scored a try against the Aussies, crossed for Ireland’s second try in the game against the Spaniards bringing his tally for the tournament to seven.

Earlier the Ireland Women’s Sevens lost to an injury time try to England, going down 26-21, to finish 10th overall in Dubai.

Manchester United close to signing Bruno Fernandes for €55m 22:06
Ireland complete clean sweep of South Africa 21:19
Huw Jones says Scotland players ‘not that bothered’ by Russell’s departure 20:49
Kobe Bryant crash: Questions emerge about why helicopter was flying in fog 19:41
Ireland predicted to win its best ever Olympic medal haul in Tokyo 19:35
Here is your handy guide to sport on television this week