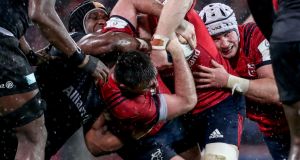 Saracens’ losing bonus point in Thomond Park has retained the holder’s interest in qualifying for the knock-out stages and Mark McCall has confirmed that many of his frontline internationals will return for next week’s meeting with Munster in Allianz Park.

“It’s probably out of our hands to a degree,” said the Saracens director of rugby after a point which leaves them on six points, five behind Munster and six adrift of Racing at the halfway stage in Pool Four.

McCall had already intimated some of his missing World Cup final contingent would return next week and confirmed: “We’ll rotate. Some of the people who haven’t played today will play. Some of our non-internationals, who have had a really busy eight weeks or so, they’ll get some rest.

“We’ve just got to manage our group as well as we can. We believe we’ve got a really competitive group of players and some of the experiences our younger players are getting, especially in a great place like Thomond Park, for young Vunipola to play flyhalf in a game like today, is going to be worth its weight in gold for someone like him.”

McCall admitted to having mixed feelings after obtaining a losing bonus point. “A mix of [being] very pleased with a lot of the things, the effort, the togetherness that we showed. The ability to bounce back from a number of things that went wrong in that game was really good.

“A bit of frustration, because having got ourselves into a situation where we had the elements in the second half and only a seven-point deficit. It’s probably something we’ll look back on and be frustrated that we couldn’t have done better in the second half.”

McCall reckoned that Munster’s “defensive lineout probably won them the match” while Brad Barritt, Saracens’ captain, said the conditions were “very trying” and added: “Each team probably had a couple of opportunities, and Munster took one of theirs, whereas we didn’t take either of ours.”