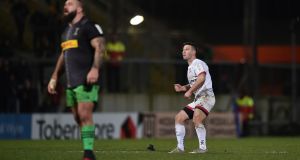 Scrumhalf John Cooney kicks the game-clinching penalty in the dying moments for Ulster against Harlequins at the Kingspan Stadium. Photograph: Charles McQuillan/Getty Images

It seemed an almost too familiar narrative as yet another edgy Champions Cup affair was decided when a late, and unforeseen, play delivered the needful for Ulster.

This time it wasn’t a Jacob Stockdale intercept, or a solo run by John Cooney that helped take the northern province to three from three in Europe and back to the top of their pool.

Instead, this was a nerveless long-range shot, from Cooney of course, which got Ulster over the line with less than two minutes to go after Adam McBurney had been needlessly sacked off the ball by Tevita Cavubati.

It completed quite a comeback with Ulster looking down and out when 24-15 behind with 20 minutes to go, giving further definition for Dan McFarland’s “fight for every inch” mantra.

But had Harlequins hung on to win after two quickfire tries following half-time from hooker Elia Elia, his second a peach of a score which went the length of the field after an intercept and lung-busting burst from the impressive Alex Dombrandt, then Ulster could have had few complaints.

The province were worryingly profligate with ball in hand, butchering a number of scoring opportunities with Cooney, on one occasion, ignoring Louis Ludik outside him with the line looking open. The go-forward the home side had hoped to secure from Marcell Coetzee also failed to materialise in the way they would have hoped leaving Stuart McCloskey to plough a lonely furrow.

Somehow, though, they found a way to win which puts them one point ahead of Clermont Auvergne in Pool Three at the halfway stage.

Even so, McFarland didn’t mince his words regarding Friday’s return fixture at the Stoop against a Quins side who Paul Gustard emphasised afterwards are not yet out of the reckoning.

“We’ve got Harlequins away and then we have to play Clermont away [in January] and if we play like we played here in this game over at the Stoop we haven’t got a chance of winning,” McFarland insisted.

“I genuinely believe that,” he added just in case anyone thought he was simply playing to the crowd.

“We’re going to have to be a whole heap better than that to be able to countenance a win [at Harlequins].

Of the game itself he said, “We’d had plenty of chances to win prior to that [Cooney’s penalty] that we hadn’t taken.

“I thought they put us under pressure. They’ve got some really good players that caused us trouble. Perhaps we didn’t expect that and that’s probably on me,” he added, distracting some attention from his players.

Turning to the challenge of playing Quins again after a six-day turnaround, he continued with the theme that this will represent a significant moment for his evolving if far from fully firing side.

“This is a team that can grind out wins but is in the process of becoming a consistently good team.

“We’ve a fair way to go before we become consistently good.

“So, going into the next game we’re going to have to reassess where we’re at and make sure we do the fundamentals of the game right.

“This is Champions Cup rugby. If you sit down and say ‘name me the teams that are going to be in the quarter-finals’, the clubs roll off your tongue and we’re not one of them. That’s the bottom line.”

In the first half, a rare moment of accuracy ensured they drew level with Quins after Dombrandt’s line off Kyle Sinckler had the visitors 10-3 up, when Billy Burns’ cross-kick was collected by the industrious McCloskey who supplied Sean Reidy.

Cooney’s conversion made it 10-10 which is how it was when the sides changed ends.

McCloskey’s unconverted pile-driving try just after the restart offered hope that they would stretch away particularly when Marcus Smith hit the upright with a kickable penalty.

But then two tries in three minutes from Elia, both converted by Smith, had Quins 24-15 in front with Ulster struggling for air.

A driving maul score from McBurney and a Cooney conversion with 15 minutes got them back within striking distance until the scrum-half nailed that late penalty from 10 metres inside Quins’ half.

Amid all the celebration in the Kingspan stands, McFarland and his side knew only too well that they had pretty much escaped to victory.

Replacements: K Treadwell for O’Connor (58mins), A McBurney for Herring and M Rea for Coetzee both (60mins), M Faddes for Gilroy and T O’Toole for Moore (both 73mins). Unused: A Warwick, D Shanahan, B Johnston