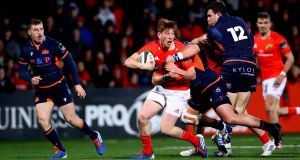 Securing a regular high-level playing outlet for the premier young talent in Irish rugby remains a conundrum for the IRFU.

There are a finite number of places in the provincial academies and they can’t accommodate everyone with potential so it is often left to the clubs, who predominantly first develop many of these players, to provide them with an opportunity to continue their rugby education once they have left school.

The fact that players mature at different rates means that the academy system by its very nature is imperfect.

The meritocracy of the system should demand a regular playing assessment. That comes through underage representative rugby initially whose final staging post is the Ireland Under-20 team but there are also avenues in terms of the Celtic Cup and All-Ireland League rugby.

Last season, under head coach Noel McNamara, the Ireland team won an U-20 Six Nations Grand Slam for only the second time in history and but for a seriously debilitating injury profile might have carried that form into the Junior World Championship in Argentina. Getting games in the Pro14, never mind the Champions Cup, is not generally accessible, save for a select few.

As the graphic illustrates, seven of last season’s Irish 20s have played at least one senior competitive game for their respective provinces in the present campaign, albeit acknowledging that four, Scott Penny (Leinster), Craig Casey (Munster), Angus Kernohan (Ulster) and Ryan Baird (Leinster) made their senior provincial debuts last season.

In this season’s Celtic Cup there were 33 players from the Irish 20s last season who lined out for their provinces, many playing two-thirds or more of the matches.

Leinster led the way with 16 players, Munster gave game time to eight, Ulster five, and Connacht four in a tournament that was run off in a single block of matches between late-August and mid-October. Since then the pathway for the majority has been AIL rugby at various levels. The issue is the discrepancy in standard.

Those who are playing Divisions 1A and 1B and are members of a provincial academy or the Irish 20s squad have access to footage of their performances, spliced specifically for each individual, provided by the IRFU’s analysis department through a software programme; the same as used by the national and senior provincial teams. This is a hugely beneficial developmental tool for players and enables coaches to offer direct feedback.

However, for those that plying their trade in Divisions 2A, 2B and 2C there is no such facility; quite apart from an appreciable drop in playing standard.