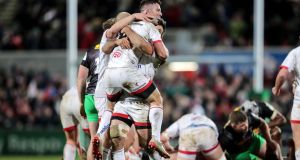 Ulster’s John Cooney celebrates at the final whistle with Louis Ludik after his late penalty secured victory over Harlequins in the Heineken Champions Cup game at the Kingspan stadium in Belfast. Photograph: Laszlo Geczo/Inpho

Ulster came from nine points behind to snatch a third win from three in the Heineken Champions Cup courtesy of a late penalty from John Cooney as they went back on top of Pool Three in Belfast.

What had looked to be heading towards a shock result for Harlequins in the first of the sides’ head-to-heads turned dramatically when Tevita Cavubati hit Adam McBurney without the ball and Cooney coolly slotted the penalty from the 10-metre line.

Ulster scored tries from Sean Reidy, Stuart McCloskey and Adam McBurney while Elia Elia bagged two and Alex Dombrandt one for the visitors.

Ulster got going with a seventh-minute Cooney penalty but Quins tied the scores through Smith’s first shot at goal after the northern province strayed offside.

Quins then stepped things up and after a dangerous burst from Gabriel Ibitoye it took Louis Ludik’s interception of James Lang’s pass to keep Ulster’s line intact.

Ulster then squandered their own chance when Cooney held on to the ball with Ludik free outside him, which came just ahead of Chris Robshaw’s jackal on Marty Moore.

Quins punished them four minutes before the half hour when Dombrandt dotted down from a Kyle Sinckler pop pass after Ibitoye and Ross Chisholm had made ground with Smith’s conversion putting the visitors 10-3 ahead.

Ulster finally put something of substance together after the half hour when, with a penalty coming, Billy Burns’s cross-kick following Iain Henderson’s rip picked out McCloskey, who released Reidy to score. Cooney’s conversion tied the scores at 10-10.

Despite Ulster throwing everything, almost recklessly, into attack in the closing minutes the scores stayed level. Again, the home side were living dangerously with Cooney having to bring Dombrandt down in one last-ditch tackle.

The new half was only three minutes old when McCloskey smashed his way over in the left corner after Burns and Luke Marshall combined to allow the Ulster centre smash through Chisholm.

Cooney was well wide with the difficult conversion.

Smith then hit the upright with a 50th-minute penalty shot after McCloskey was pinged for a high tackle on Francis Saili.

But Quins struck in the 57th minute. A penalty was put into the corner and from the following maul, Elia lumbered over.

Smith converted to nudge Quins ahead and then a length of the field move brought Elia his second try.

It came when Ludik was pulled down short of Quins’ line and Dombrandt intercepted Cooney’s pass to Marcell Coetzee and charged downfield.

He linked with Chisholm and Ibitoye before, in midfield, Elia dummied Kieran Treadwell and ran in unopposed making the extra two points a formality for Smith.

Again Ulster had to respond and did so with their own score off a driving maul. A penalty was put to the corner and after Henderson won the lineout, Ulster got early momentum and drove over the line for McBurney to get the touchdown and Cooney’s conversion got the home team to withing two points, 22-24 behind.

All that remained was Cooney’s match-winning moment.