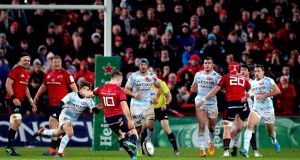 Munster’s JJ Hanrahan misses a late drop goal which could have won the game against Racing 92 at Thomond Park, Limerick on Saturday. Photograph: Ryan Byrne/Inpho

The odds on the Irish provinces repeating their four-timer of the opening weekend were always more unlikely in a quartet of Franco-Irish battles against four of the leading Top 14 sides. And a return of two wins and a draw ensures the upcoming back-to-back games, all Anglo-Irish affairs, will be as pivotal as ever.

Nowhere was the glass half-full or half-empty quandary more in evidence than following Munster’s thrilling 21-all draw at home to Racing 92 on Saturday evening. For long stretches of the second half against a Finn Russell-inspired Racing in full flow, a draw appeared like a good result.

Munster had rowed with the punches before bouncing off the ropes, and it seemed that familiar Thomond Park tidal wave would complete another of their Houdini-esque acts of escapology until, almost disbelievingly, JJ Hanrahan’s hooked drop goal in the 80th minute sailed wide.

The draw would seem to put greater pressure on Munster to beat the holders Saracens at Thomond Park on Saturday week, although Johann van Graan would not quite admit as much.

Saracens home and away was always going to be tough. They are such a fantastic rugby side

“I am going to have to think about that one. It’s the same position we’ve been in for the last two years. Ever since the draw for this group came out we know it was going to be tough either way, and there’s so much rugby to go.

“What I’ve learned since I came to Munster two years and one week ago is that this competition gets decided in round six,” he added, maintaining the bonus point accrued in overtime of last weekend’s win away to the Ospreys could yet prove crucial.

“Saracens home and away was always going to be tough. They are such a fantastic rugby side. We’ve got European champions home and away in round three and four and I guess, from a spectator point of view, what more can you ask for?”

Saracens were probably happiest of all with the drawn Thomond duel, which leaves them within two points of Racing and Munster. Not until Mark McCall unveils his side at lunchtime on Friday week will we know for sure, but, asked if he took Saracens’ prioritising of domestic matters over the defence of their Heineken Champions Cup with a pinch of salt, van Graan said: “I’ll take that with a bowl of salt.”

Noting Elliot Daly’s return from World Cup duty with a try-scoring debut in their 44-3 bonus point win over the Ospreys, van Graan deduced: “That’s not your second string side. So we’ll regroup we’ll just take stock obviously with the Irish lads coming from the World Cup. Some guys might rest this week. We’ve got to manage them. We’re back to the Pro14, a big game against Edinburgh and then we’ve got Saracens at home, so we’ll bide our time and see what happens in two weeks’ time.”

Munster’s resources are looking a little thinner after Jeremy Loughman’s ankle injury compounding the absence of Dave Kilcoyne. They also bade a reluctant farewell to ex-All Blacks scrumhalf Alby Mathewson, who signed off with an influential last-quarter cameo.

“Like Pete [O’Mahony] said, he has been the standard-bearer for the last 15 months for this team. I’ve coached for 17 years in professional rugby, nine at the Bulls, six at the Springboks and two at Munster, and if I had to pick one player that shows others what professional rugby players should be like, it is Alby Mathewson.

“We will miss him very much and he’s a Munster man for always now and we can’t thank him enough. I think the word legend gets thrown around a lot but certainly from an individual point of view he’s certainly one of the very best I’ve coached.”

Leinster’s gritty 13-6 win in Lyon, combined with Northampton’s comeback win away to Benetton, sets up their double-header nicely, the first of which is in Franklin’s Gardens on Saturday week before they meet a week later in the Aviva.

Although they’ll regret letting Clermont escape with a bonus point last Friday night, Ulster host Harlequins at Kingsholm on Saturday week in the first of a double-header which offers them a chance to cement their place atop Pool 3.

A crippling injury list, scrum issues and a damaging penalty count ultimately undid Connacht in Toulouse on Saturday but, as Andy Friend maintained afterwards, the games with Gloucester were always going to determine their fate. Gloucester earned a losing bonus point with Joe Simpson’s 76th try in their 30-27 defeat in Montpellier on Sunday, and host Connacht at Kingsholm in the first of those battles on Sunday week.