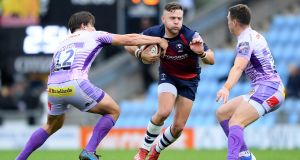 London Irish versus Bristol Bears should have been a must see game on Sunday but Paddy Jackson at fullback and Ian Madigan’s continued isolation forced a dip into why Bristol coach Pat Lam is consistently selecting 18-year-old Ioan Lloyd ahead of the 30-year-old Ireland international as cover behind starting outhalf Callum Sheedy.

Bristol are reportedly moving Madigan on next summer – for what would be his third club since leaving Leinster in 2016 – as Fijian sensation Semi Radradra replaces him as one of the club’s two marquee players that can be paid outside the salary cap.

This must be an extremely tough period for Madigan who arrived in England, after a disappointing season at Bordeaux, to guide Bristol back into the Premiership in 2018.

London Irish boss Declan Kidney is using Stephen Myler at outhalf ahead of Jackson while over in Paris Simon Zebo cannot command a starting place in the Racing 92 back three.

A line was drawn in the sand by the IRFU’s chief contract negotiator David Nucifora when Johnny Sexton returned home in 2015. For all Joe Schmidt’s assurances of keeping in text communication with players abroad, out of sight really does mean out of mind. Madigan’s current plight only strengthens Nucifora’s position.

Madigan’s kicking statistics should leave him with plenty of options but it’s unclear if he would be willing to take a dip in salary to return home. Not that Leinster or Munster are in the market for a versatile 10. Japan is where so many 30-something Springboks and All Blacks can be found. Maybe that’s the next step.

Not to come across all biblical but Conor O’Shea is proof that a prophet is never fully appreciated in his home land.

O’Shea’s appointment as England’s performance director proves how highly regarded he is across the water.

“There is an exciting vision at the RFU,” said the 49-year-old. “It is not just about winning tomorrow, but also about sustaining success and winning long into the future.”

Actually, London probably is home to O’Shea and his family, having initially emigrated in 1995, and now they return after a three year sojourn in Italy.

“My wife and kids deserve that if I go to a match, I’m not there chewing over it for 10 days and have our mood dependent on every game,” he added in a brief visit to Dublin.

So, the merry go round continues as the RFU hire an Irishman to do the job an Australian is doing in Dublin. This is hardly an unusual pattern. Take Munster. They parted ways with Jerry Flannery and Felix Jones only to recruit English and Australian coaches to run the pack and attack. The Ireland set up has completed the full trick of England’s 2015 coaching ticket with Mike Catt joining Andy Farrell, Stuart Lancaster and Graham Rowntree on the Emerald Isle.

O’Shea has never worked as a professional rugby player, coach or administrator in Ireland. Perhaps that ship has sailed.

“He will probably have very similar philosophies to how Brian Ashton played the game but I think we will have the armoury to be able to do it. We were just not ready for Brian. He was too early for Irish rugby but knew exactly what was needed.” – Conor O’Shea promotes incoming Ireland attack coach Mike Catt.

3: The number of years in the new deal penned by Bundee Aki to take him up to 2023 World Cup in France. Good business for everyone involved.

Christmas is close and plenty of rugby autobiographies are clogging up the book shelves. Despite an interesting and well written Eddie Jones memoir ‘My Life and Rugby’ with Donald McRae and ‘Gordon’s Game,’ a children’s book by Paul Howard and Gordon D’Arcy, the others are best left where they currently reside.

If still seeking to gift someone a decent rugby read over the holidays we would direct you towards the ghosts of manuscript’s past.

‘Rugby, Ou Sont tes Valeurs?’ – translation: Rugby, where are your values? (2014) – by Laurent Benezech lifts the lid on the dangerous “medicalisation of performance” that has infected the sport. If your French isn’t up scratch try ‘Confessions of a Rugby Mercenary’ (2009) by John Daniell, a journeyman Kiwi lock who digs into the violence synonymous with the French club game. There are shades of Jim Bouton’s fascinating baseball tell-all ‘Ball Four.’

Best of the rest are ‘Engage’ (2011), Paul Kimamge’s harrowing but brilliantly constructed story about Matt Hampson’s life before and after breaking his neck in a scrum, ‘The Battle’ (2017) is worth revisiting because of the time Paul O’Connell and Alan English invested in the words, ‘From There To Here’ by Brendan Fanning and ‘No Borders’ by Tom English are essential history lessons while I thoroughly enjoyed working with Geordan Murphy on ‘The Outsider.’