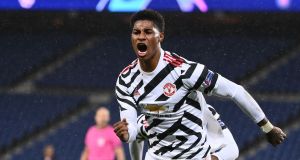 The 2020-21 Champions League group stages got underway last night, with Ole Gunnar Solskjaer’s Manchester United deserved 2-1 winners away to last year’s finalists Paris Saint-Germain. The visitors took the lead in the first-half through a Bruno Fernandes penalty - scored at the second time of asking - before an Anthony Martial own goal levelled things up in the 55th minute. However United rallied and Marcus Rashford was once again the match winner in the Parisian rain, securing all three points with a fine, low, late strike. Elsewhere Chelsea and Europa League winners Sevilla played out a goalless draw at Stamford Bridge, while there were wins for Juventus and Barcelona against Dynamo Kiev and Ferencvaros respectively. Tonight Manchester City welcome Porto to the Etihad (kick-off 8pm) while Liverpool, without Dutch centre-back Virgil van Dijk, travel to Amsterdam to take on Ajax (8pm).

In his column this morning Gordon D’Arcy has given a damning assessment of the mercurial talents of Scottish outhalf Finn Russell, following Racing 92’s agonising Champions Cup final defeat to Exeter last weekend. Russell had inspired Racing into the final but then played a part in their downfall at Ashton Gate, and D’Arcy believes he should be left out of the travelling party for next summer’s Lions tour. He writes: “A European final magnifies the flaws in any individual or team. The Lions series is another level again. Russell might still play his way onto the plane as the third choice outhalf but even that would be an unnecessary risk by Warren Gatland. At the very highest standard of rugby Russell is a liability. That’s harsh to say about such a gifted footballer but he literally threw the trophy into Exeter’s arms.”