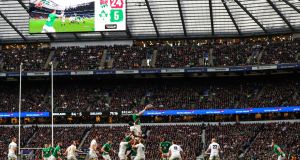 Ireland were beaten by England at Twickenham in February before the tournament was suspended. Photo: James Crombie/Inpho

The 2020 Six Nations resumes this week 32-weeks after it was brought to a truly shuddering halt with the postponement of, first, the Ireland-Italy game and then the final round of matches. That it resumes with the same schedule at least affords the competition a degree of continuity, although naturally it’s not as if the tournament is picking up entirely as it left off. In some respects, Ireland appear to be the net losers.

To recap, new eras dawned, with only Eddie Jones and Gregor Townsend still in situ from the year before. Rejuvenated by Faiben Galthié and Shaun Edwards, France had set the tournament alight by beating England 24-17 on the opening weekend in Paris, admittedly after almost blowing a 24-0 lead after 50 minutes.

They added a home win over Italy and a thrilling win away to Wales before slipping up in Murrayfield against a Scottish side who, despite being without Finn Russell (now back in favour), had extended Ireland and England to one score wins.

As for Ireland, they backed up that nervy opening win in Andy Farrell’s first game in charge at home to Scotland with a bonus point win over Wales before coming to ground against England.

Indeed, it’s almost a surprise to find Ireland still in contention for the title recalling how, by Farrell’s own admission, they hardly fired a shot in the first-half at Twickenham. England didn’t create a whole lot themselves, but grubbers in behind the initial Irish green line exposed a chink in the defensive system, albeit helped by favourable bounces. To finish up losing by a mere 24-12 was a reprieve.

On the same weekend that Ireland’s game at home to Italy was postponed at the behest of the Irish Government as the outbreak of coronavirus began to take hold, the England-Wales and Scotland-France games went ahead in front of capacity crowds at Twickenham and Murrayfield.

After six years without a sending off in the championship, the England-Wales game was blighted by a deserved red card for Manu Tuilagi after he launched himself like a human missile as George North ducked for the try line. Nonetheless, Eddie Jones maintained the decision by referee Ben O’Keefe’s was “complete rubbish”.

For their part, France’s Grand Slam hopes began to unravel from the fifth minute the next day in Murrayfield when Francois Cros was yellow carded by another New Zealand referee Paul Williams for tipping Grant Gilchrist onto his head. Within three minutes France also lost outhalf Romain Ntamack to a head knock.

Their goose was pretty much cooked when Mohamed Haouas, their 25-year-old Montpellier tighthead playing in his fourth test, was red carded in the 37th minute for punching James Ritchie, who had run 20 metres to exacerbate the bout of fisticuffs.

Although a wonderful piece of vision by Antoine Dupont for a try by the recalled Damian Penaud briefly put Les Bleus ahead, by the end the numerical disadvantage was too much and the talismanic Dupont also went off with a shoulder injury.

Despite that defeat by England, and then having the Italian game postponed, the Irish squad were desperate to put to rights their performance in Twickenham and were quite gung-ho about the prospect of taking on les bleus in Paris.

Furthermore, Haouas had been suspended for three weeks, Dupont had been ruled out and with a six-day turnaround, there was little prospect of Ntamack playing either. Fast forward those 32 weeks, more slow-forward really, and the brilliant Dupont, Ntamack and Haouas are in the 31-man squad Galthié has named for France’s November programme.

By contrast, Ireland have lost Jordan Larmour, Tadhg Furlong and Dave Kilcoyne, who had all played in each of the first three rounds, and now Iain Henderson as well.

Ireland’s tighthead cupboard has never been overflowing, with the baton being successfully passed on just in the nick of time from John Hayes to Mike Ross to Furlong in the Six Nations era. On the rare occasions Ireland have been without their first choice tighthead they’ve usually struggled, although Andrew Porter did fill in successfully for Furlong against Wales in round three of Ireland’s 2018 Six Nations Grand Slam.

France’s extended end-of-year Test-window had led to another prolonged and very public spat between the French Federation and Ligue Nationale de Rugby. Caught between a rock and a hard place, the Toulon scrumhalf Baptiste Serin described the players’ predicament accordingly. “We have our ass between two chairs.”

Ultimately, agreement for France’s extended schedule was reached on the premise that there would be a maximum of three matches per player. But with the Autumn Nations Cup no longer affecting world rankings in the draw for the 2023 World Cup in France, Galthié is sure to prioritise their game against Ireland.

Mathematically any one of four can win the title, although Scotland’s odds of 100/1 are about right. Ireland are fourth, but can leapfrog to first in the table by beating Italy and even move a point above England and France (each on 13 points) before the final weekend with a bonus point win this Saturday.

But England, whose points difference of +15 is superior to both France (+13) and Ireland (+5), play Italy in Rome on Saturday week. Granted, both France and Ireland will know exactly what’s required of them come kick-off in Paris (8.10pm Irish time), but presuming England win handsomely with a bonus point, France would have to match that and score three points more, while Ireland would most likely need a big win or a five-point haul.

True, two bonus point wins would ensure Ireland of the title, but Paddy Powers have England at 1/4 to win the title, with Ireland at 10/3 and France at 14/1.

This seems about right too.