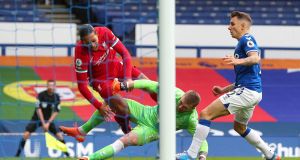 Liverpool’s fury at losing Virgil van Dijk was laid bare on Tuesday when Georginio Wijnaldum accused Jordan Pickford of being “completely stupid” and Everton of a “completely unacceptable” approach to Merseyside derbies. A clearly seething Jürgen Klopp said he shared his players’ opinion.

The Liverpool manager and midfielder are in Amsterdam for Wednesday’s Champions League opener against Ajax but it was their Merseyside rivals who were the main focus – and target – of a combative press conference. Wijnaldum said Liverpool players endured sleepless nights on Saturday after Van Dijk damaged his ACL and remain devastated four days on. The Netherlands’ international, a close friend of his compatriot, did not try to disguise the impact of the defender’s loss on Liverpool nor the feelings within the squad over what happened at Goodison Park on Saturday.

“We are upset. The way Pickford went in on the challenge was completely stupid in my opinion. I believe he didn’t want to injure Virgil the way he injured him but the way he took the tackle basically he didn’t care about what happened after the tackle. We had a lot of games against Everton and in my opinion they take it way too far in the games we play against them.

“We know it is a derby and everyone wants to win a derby so sometimes you go a little bit over the top but it was too much. It was not only his tackle, we can talk about the tackle from Richarlison on Thiago which was also a nasty one. That is what bothered me the most and I think most of the other players as well. Accidents can always happen in football, you can be unlucky with a tackle and injure someone, but the way they were doing it is completely unacceptable. It makes it harder that they don’t get punished. In this case Pickford doesn’t get punished after seeing the videos.”

Van Dijk will miss the majority of the season as a consequence of the knee injury, which requires surgery, while Thiago has been left on Merseyside as a precaution after suffering a slight knee problem in the foul that saw Richarlison dismissed. Merseyside Police are investigating threats made to both Everton players on social media.

Liverpool are also furious over the conflicting explanations that the authorities have given for how VAR was used at Goodison, and have asked the Premier League for a review, although Everton came in for the fiercest criticism from Klopp too.

The Liverpool manager, who is also without Joel Matip against Ajax, said: “A couple of days ago something happened which should not have happened in a football game. It was not the first time and it probably won’t be the last time. I see it similar to my players. Both challenges were difficult to accept, let me say it like this.

“What we can all do is try to change these kind of things. It’s really hard for us because Virgil is our boy and it has nothing to do with the quality of Virgil. Yes, he is a world-class player and we’ll miss him but we also miss (Alex) Oxlade (Chamberlain) and injuries happen in football, very often in challenges when both players are just trying to play the ball. That was not the case in these two challenges and it makes it so different and difficult to take.

“In this game there were a few things that came together. Firstly, the ref doesn’t see it. Michael Oliver is an excellent referee usually but why he didn’t see it, I don’t know because he had the best view. Then VAR forgets the rules. It is not that I want every player punished but it is something we all agree on – if you do something wrong, you have to deal with the consequences. At this moment there are only two people dealing with the consequences: Virgil van Dijk and Thiago Alcantara.”

Liverpool’s visit to Amsterdam is the first competitive meeting between the clubs since Ajax’s famous 7-3 aggregate win in the 1966-67 European Cup, when the Total Football vision of Rinus Michels and Johan Cruyff stunned the English champions. Bill Shankly was so impressed afterwards that he visited the Ajax dressing room to shake hands with all of their players.

Erik ten Hag’s side – who officially remain Dutch champions after the 2019-20 season was abandoned – currently sit second in the Eredivisie, and the head coach believes Liverpool’s approach will not change as a result of van Dijk’s absence.

“It’s not going to be a different Liverpool,” ten Hag said. “Liverpool always play the same. Their principles are hammered in and they can easily switch with the quality they have. The quality of Man A can switch to Man B. The whole team won’t change because Virgil Van Dijk isn’t present.”

The teams could have met in the 2019 final, of course, had Ajax not succumbed to Lucas Moura’s 96th minute winner for Tottenham in the semi final second leg in Amsterdam. “It would have been nice to play against them in the final,” their captain, the former Southampton forward Dusan Tadic reflected. “We would have had a larger chance than Tottenham that’s for sure.” – Guardian