Paul Broderick was the difference for the home side, kicking 10 points 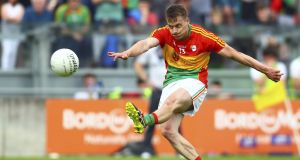 Points from Carlow’s Paul Broderick and substitute Darragh Murphy in the final minute of injury time got new manager Niall Carew off to a winning start over Sligo at Netwatch Cullen Park on Saturday evening in Division 4 of the National Football League.

Broderick was the game’s top player, scoring a total of 0-10, five from play and one from a 45 in a man-of-the-match performance.

A goal from Sligo’s Mikey Gordon in the sixth minute put the Yeats County 1-1 ahead and there was nothing to choose between the teams in a highly entertaining game - they were level six times before the late brace of points.

Carew, who previously managed Sligo, saw his team trail 1-7 to 0-9 at half time and when the visitors struck for a goal from right full-forward Red Óg Murphy, followed by a point from Liam Gaughan to put them five points clear (2-9 to 0-10), things looked bleak for the home county.

But goals from Ross Dunphy and substitute Conor Crowley with his first action, put Carew’s men back in contention and in a tight finish they just about deserved both league points.