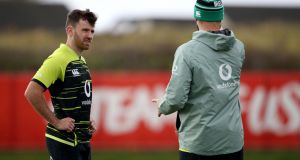 Hugo Keenan could be in line for his Test debut against Italy on Saturday. Photograph: Dan Sheridan/Inpho

Events dear boy, events. And never a truer word. The world is a rather different place alright from the point ten months ago when the Ireland-Italy game was postponed and, as is invariably the case in such a brutally demanding sport, Andy Farrell will be unveiling a somewhat revamped Irish team at lunchtime today for Saturday’s re-arranged Six Nations game.

Of the 23 who were on duty in Ireland’s defeat by England, Jordan Larmour, Tadhg Furlong and replacement prop Dave Kilcoyne have all been ruled out, while Devin Toner, who started that day, and replacement John Cooney, didn’t make the 35-man squad. Furthermore Iain Henderson, who started the wins over Scotland and Wales, has been harshly suspended for both this and the final against France in Paris.

None of the enforced solutions appear especially clear-cut. Beginning with the composition of the back three, the four outside backs are Jacob Stockdale, Andrew Conway and the uncapped duo of Hugo Keenan and Shane Daly.

Stockdale has had his defensive issues since resumption but, significantly, he has started five of his seven games for Ulster at fullback. As much as any player, Stockdale’s game can soar if he has a positive early involvement, and buoyed by an eighth-minute try in Ulster’s win over the Ospreys last Saturday his performance was a reminder of his game-breaking abilities – which have never gone away.

Of the uncapped pair, Keenan has been playing well and playing more rugby and, while much of the coaches’ thinking will have been influenced by training, he may thus be in line for his debut on one wing, with Conway on the other.

Brian O’Driscoll, in these pages, notes that the Robbie Henshaw-Garry Ringrose combination has more familiarity and defensive solidity, but that Bundee Aki offers more of an attacking edge. He’s also been on fire since the resumption.

Conor Murray and Johnny Sexton look sure to resume their partnership, also for reasons outlined by O’Driscoll, and it would be no surprise to see the uncapped Jamison Gibson-Park in line for a Test debut off the bench given his form, especially since lockdown.

The 28-year-old one-time Blues, Hurricanes and Maori All Blacks scrumhalf is oozing confidence, and as well as improving his kicking game since landing in Leinster over four years ago, offers something else with his sniping, offloading and support lines, as well as the calm decision-making that Farrell hailed last week.

The pack could actually prove more complex. On the premise that Furlong’s absence is already forcing a change at tighthead, Cian Healy and Rob Herring might be retained, although the doubt about Rónan Kelleher (quad) could yet see Dave Heffernan promoted to the bench at the very least.

Leinster’s scrummaging difficulties against Saracens have shone a light on Andrew Porter’s relative inexperience at tighthead but in the only Six Nations game Furlong has missed since the start of the 2017 campaign, Porter acquitted himself well in the third leg of Ireland’s 2018 Grand Slam. He’s also been a virtual ever-present in the matchday 23 for the last three years, but John Ryan and Finlay Bealham have been scrummaging well this season.

Ryan Baird may well have been in line for his Test debut off the bench this week but in his absence, and that of Henderson, that leaves Farrell and co choosing one from Tadhg Beirne, Quinn Roux and Ultan Dillane to partner James Ryan.

Beirne must be the favourite, and although Dillane was a late call-up, the choice of back-up lock looks a tight one which may also be based largely on training these past few days in the IRFU High Performance Centre in Abbotstown.

As ever the selection of the loose forwards remains fiercely competitive. The regard in which the Irish coaches hold Caelan Doris was evident in them choosing him at number eight for the opening Six Nations game at home to Scotland and but for the concussion which cut short that debut to four minutes, he might well have continued there against Wales and England.

In any event, little about Doris’ impact off the bench in Twickenham will have diluted the coaches’ desire to see more of the 22-year-old in an Irish jersey. Although, interestingly, Leinster have been picking Doris at blindside since the resumption, the Irish management’s decision to start him at eight against Scotland may be a pointer. Either way, he seems sure to start.

If so this would mean picking either CJ Stander or Peter O’Mahony, while the call between Josh van der Flier and Will Connors, who word had it was being earmarked for his debut against Italy before it was postponed, also looks tight.