Édouard Mendy returned from injury and kept Spaniards out 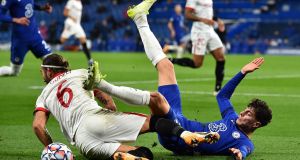 At least Chelsea managed to stand tall at the back. Yet while there were no defensive calamities from Frank Lampard’s side, there was precious little inspiration at the other end. Low on creativity in the final third and short on fluency in possession, Chelsea made few chances and ended up with more questions than answers after a tough encounter with Sevilla.

In the end a goalless draw with a side as awkward Sevilla was hardly the worst way for Chelsea to open their Champions League campaign. The Europa League winners brought all their European know-how to west London and might have won had they shown more conviction, leaving Chelsea content with a rare clean sheet, albeit with questions to ponder about where to fit their expensive new signings into their attack.

The early exchanges suggested that Chelsea’s game management would be placed under the microscope. With Julen Lopetegui’s instructions echoing around the arena, Sevilla relished the competitive challenge. They were disciplined and organised, strong in the tackle and quick to the loose balls, while their pressing drew errors from Chelsea, particularly when Jorginho earned a yellow card for dragging Lucas Ocampos down after being robbed by the Sevilla winger.

Jorginho, whose lack of mobility alongside N’Golo Kanté at the base of midfield has been a problem for Chelsea, was on thin ice. The Italian might be a clever passer but regaining possession is not his forte and he was fortunate not to receive a second booking after tripping Ivan Rakitic. Chelsea were looking edgy and the opening goal almost arrived from the opening free-kick, only for Édouard Mendy to repel a header from the unmarked Sergi Gómez.

Chelsea were relieved that Mendy was available to replace Kepa Arrizabalaga in goal after recovering from a thigh injury. But Sevilla were calling the shots. Nemanja Gudelj was a calm presence in midfield and Rakitic, keen to show that he still has plenty to offer after joining from Barcelona, was finding too much space. Rakitic was pulling the strings and it was a surprise when the Croatian ruined a promising break, overhitting a pass to Suso.

Chelsea, who had earlier sprung a surprise by naming their technical and performance adviser, Petr Cech, in their Premier League squad to provide emergency goalkeeping cover, were conceding territory. Sevilla probed, threatening when Suso headed wide, and the breakthrough almost arrived when Kurt Zouma’s miscued clearance fell to Ocampos, who saw a firm drive handled well by Mendy.

Cech would have approved of that save but Chelsea were being forced to play as the away team. Their attacking players were seeing little of the ball and it was hard not to question Lampard’s decision to use Christian Pulisic on the right flank given that the American tends to produce his best work from the opposite side.

Yet while Pulisic was struggling to combine with Kai Havertz and Mason Mount in attacking midfield, there were flashes from Chelsea. Timo Werner was a livewire up front: fast, slippery and always hunting a shooting opportunity. Werner had Chelsea’s best chance of the half, turning and firing straight at Bono, and he also combined with Reece James to create an early opening. James, preferred to César Azpilicueta at right-back, sent in a low cross that Pulisic almost managed to convert.

Sevilla were strong at the back, even though Jules Koundé was missing in central defence after testing positive for Covid-19. They remained tough to break down even after Fernando dropped back from midfield when Gómez limped off. Chelsea were running down too many dead ends.

They needed a different approach and Lampard attempted to make them less predictable at the start of the second half, giving Pulisic, Mount and Havertz freedom to swap positions at random.

Chelsea stirred, dominating possession. Pulisic ran at the opposition, winning a corner on the left. Zouma headed straight at Bono from Ben Chilwell’s delivery. Cracks were appearing in the Sevilla defence and Bono had to make another smart save from a Werner shot.

Now it was Sevilla’s turn to fall back and play on the break. Their threats were sporadic. Suso tried to scheme on the right but Chilwell shut him down. Ocampos had faded and Luuk de Jong was struggling as the lone striker. For once Chelsea’s defence looked secure. Mendy was vocal in goal, alerting his team-mates to emerging threats, and Thiago Silva offered leadership in central defence.

Yet Chelsea, who looked to spark their attack by introducing Hakim Ziyech for Mount, could never relax. Sevilla backed themselves to nick something and nearly broke through with a clever set-piece routine, Rakitic drifting a corner to the far post for Joan Jordan to volley inches over. – Guardian