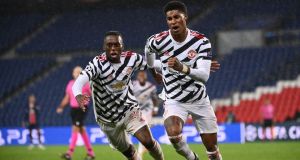 Ole Gunnar Solskjær had been clear. The Miracle of Paris from two seasons ago, when his Manchester United team drove to a famous Champions League last 16 win here, was nothing more than glorious history. His players had to make a fresh statement, to produce a performance to inspire new hope.

How they did so and once again, it was Marcus Rashford that delivered at the death. In March 2019, it was his stoppage-time penalty that helped United through and in the driving rain at an empty Parc des Princes, it was his vicious low drive that fizzed past Keylor Navas to ignite his team’s group phase campaign.

It was deserved reward for United’s positivity, for the belief they showed that they could get something from a PSG team that was strangely loose at the back. Although David De Gea made a clutch of fine saves, United pushed and probed and Rashford’s late finish was a beauty.

Solskjær had stated the lineup was the “best we can start with”, which reflected the injury setbacks – most notably for Harry Maguire and Eric Bailly, which left the manager turning to Axel Tuanzebe for the first time since the League Cup win against Colchester last December. But it also suggested he no longer believes Paul Pogba is part of his strongest XI. The big-name midfielder began on the bench.

The 3-4-1-2 system was designed to allow his team to harness the pace of Marcus Rashford and Anthony Martial but, more importantly, to be secure at the back. PSG’s front three are so slippery that each player in United’s zebra-style change strip knew that one lapse, one blink of the eye – to quote Solskjær – could be costly. The focus had to be exemplary.

It was a lapse in the PSG defence that allowed United to go in front. With his back to goal, Martial dropped his shoulder to perform a spin as he took a pass from Luke Shaw but why did Abdou Diallo lunge into him? Even with Martial turning, he did not appear to have any of the ball at which to aim. It was a clear penalty and it presented a test of nerve for Bruno Fernandes after his miss against Newcastle on Saturday.

At first it looked as though he had got it wrong again. After a trademark jump ahead of the connection, he did not pick out the corner with the side-foot and Navas plunged low to save. Fernandes’s reprieve came when VAR noticed Navas had both feet in front of the line. How were Fernandes’s nerves now? Rock solid. He went through the same routine and went for the same side. Navas went the other way.

United had needed De Gea to be alert in the early going. He made two saves and the second was a marvellous block to deny Layvin Kurzawa at close quarters from Kylian Mbappé’s cross. It looked as though De Gea did not know too much about it but his positioning was perfect. Earlier he had dived to push away an Ángel Di María curler.

Despite their latent menace up front, PSG could get little going before the interval. Their passing lacked tempo and United measured their progress in some of their tackles, with Scott McTominay and Fred showing discipline in front of the defence. The most eye-catching one came when Tuanzebe pinched the ball from Mbappé with perfect timing inside the area. Neymar was booked for taking the penalty appeal too far.

Fernandes had almost scared Diallo with an eighth-minute cross that was intended for Rashford and United grew after they went ahead. Fernandes extended Navas with a vicious shot from 25 yards while a McTominay flick hit Diallo and bobbled wide.

United had counter-attacking possibilities, with Rashford worrying the PSG defence, although he was wasteful with a final ball on 47 minutes. The home team pressed onto the front foot, with De Gea saving brilliantly from Mbappé and Kurzawa drifting a cross onto the top of the crossbar. But it took Martial’s horror moment to usher PSG back into the tie.

He was in position at the near post to head Neymar’s corner away only to close his eyes and get his angles all wrong. He would have been proud of the finish at the other end. Here, there was only a sinking feeling.

It was fast and open. Aaron Wan-Bissaka stretched into a series of fine challenges but United came to realise they could hurt PSG. The time and space that they got around the area was surprising. Danilo Pereira had to make a saving tackle on Rashford while Martial headed high when well-placed and Rashford drew an excellent save out of Navas from the edge of the area.

De Gea saved from Neymar but when Rashford got his final opening following a pass from Pogba, who came off the bench in the 67th minutes, and with PSG defenders backing off, he made no mistake. – Guardian