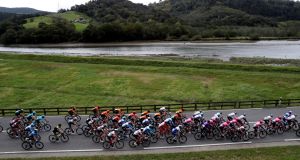 The pack of riders in action during the first stage of the Vuelta a Espana between Irun and Arrate. Photo: Kiko Huesca/EPA

They emerged under grey skies and falling leaves at crushing speed and Dan Martin was chief among them, battling out the hectic summit finish before settling on third place in the opening stage of the Vuelta a España.

Everyone said this year’s race is wildly unpredictable and rarely has any Grand Tour began like this, the peloton peeled back to just eight riders in that final press for the line, Primoz Roglic jumping off the front inside the last 1km to take the win - just over four weeks after surrendering his Tour de France lead on the penultimate stage.

With the original three opening stages in the Netherlands removed because of Covid-19, Stage 1 cut straight to a mountain chase in the Basque Country, the 173km from Irún to the Sanctuary of Arrate also playing havoc on the General Classification (GC): two-time winner Chris Froome finished over 11 minutes down, while Sam Bennett rode well to finish in a group just over 15 minutes behind, nicely poised before the first properly flat stage on Friday.

Martin made no secret of his desire to chase a stage win this year, nine years after his last Vuelta victory in 2011, and he didn’t hang around - putting himself right in contention on the final 5.3km climb up the Arrate, which did plateau for the last 2km. Roglic was definitely the strongest rider from there, team Jumbo-Visma’s defending champion from Slovenia only recently confirming his participation after the disappointment of the Tour, his 10-second stage-winning bonus leaving him five seconds in front.

With a six and four second bonus for second and third, Martin pressed right the line, the Irish rider just edging out Esteban Chaves (Mitchelton-Scott), with Richard Carapaz (Ineos Grenadiers) taking second: it means Martin ends the first day in a podium position, seven seconds behind Roglic - still a long way from Madrid on November 8th, a clear statement on intent nonetheless.

“The team did a great job for me, it’s the first time I was riding with a lot of these guys and they did a fantastic job,” Martin said of his Israel Start-up Nation team mates. “I’m happy with how I’m feeling, I’m quite surprised with how I’m feeling, but yeah it’s definitely a good start, it tough though yeah, some tough headwinds too.”

Martin first started to show his handlebars towards the front on the penultimate climb up Alto de Elgeta, with neither sight nor sound of the typically mad cycling fans so familiar to the Basque Country; it was here some of the main GC contenders got dropped, including Froome, the Ineos Grenadiers rider eventually finishing 72nd, 11:12 down, with another contender Thibaut Pinot also finishing back down in 63rd, 9:56 in arrears.

Bennett timed his hilly effort suitably well, finishing as part of a main group of riders 15:20 behind, in 138th position: as was predicted, it’s a very different challenge to his Tour, when Bennett won two stages and the green jersey.

“It was actually quite nice for the sprinters too in that we could ease into it,” he said, “well not ease into it, because it was hard, but ease into it without the stress levels. Normally you’re going in and everyone wants to get a sprint stage win, well all the sprinters do, so it can be really chaotic too.

“So it’s nice that you can get into the race, let the nerves settle, and it’s just like a normal bunch sprint then, hopefully. But no, there are very few opportunities for sprinters, we can point out two or three, maybe a couple more maybes, so it’s going to be really hard.

“I don’t think the green jersey can be an objective either because they have the same points here on the climbing stages as they do the sprint stages, and it’s not so much for the intermediate, so I think the green jersey is out of the question as well, and we’ll just have to try pick up a stage win where we can.”

Stage 2 covers 151km from Pamplona to Lekunberri, with plenty more hills, but a downhill finish, Martin already showing he has the legs to go for it again.

1 Ireland 23 Georgia 10: How the Irish players rated
2 Ireland grind their way to grisly win over Georgia
3 No fireworks but Limerick get the job done against Galway
4 Jim McGuinness: There is a way to save championship and make it competitive
5 Billy Burns provides silver lining to gloomy Ireland display
Real news has value SUBSCRIBE