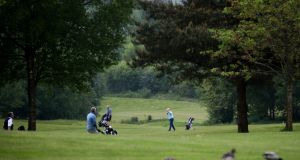 A view of golfers playing at Bunclody after courses reopened in May. Photo: Dan Sheridan/Inpho

Is it time to pack away the golf clubs and allow them to gather winter cobwebs? Or, in hope, will Ireland’s 250,000-plus golfers get the chance to extend their season?

The answer to such questions was expected to be provided on Tuesday, as the GUI and the ILGU sought clarification from Sport Ireland and the government on whether or not golf clubs could continue to allow players to play on, either socially or competitively, under the new Level 5 Covid-19 restrictions in the Republic. Golfers in Northern Ireland are allowed to play under the Stormont Assembly’s restrictions.

There were initially conflicting messages from politicians when the move to Level 5 was announced on Monday night, with independent TD Mattie McGrath including golf activity among those that could continue (as long as players observed the 5km travel restriction) while Green Party leader Eamon Ryan appeared to suggest that golf was not one of the activities on the permitted list.

The GUI and ILGU, the governing bodies, had sought clarification on the confusion with the intention to inform whether clubs could give the go-ahead to members to continue playing while adhering to public health guidelines.

“Like other sports, (the) GUI and ILGU remain engaged with Sport Ireland regarding the impact of the new restrictions due to come into effect (midnight Wednesday). Clubs will be advised of the outcome as soon as possible,” the GUI posted on social media where the issue had become a hot topic.

The Yes/No Game in play since the latest Level 5 measures were announced is not just confined to golf, with tennis, sailing and fishing sporting bodies also awaiting further clarification on how the Level 5 restrictions would impact their members.

Unquestionably, as happened in the earlier phases of the roadmap earlier in the summer, the 5km restriction will automatically rule out a significant number of golf club members even should golf be permitted. On this occasion, though, it would also seem that junior members may continue to attend golf academies or coaching (which could prove timely with the school midterm break next week) as there is an exemption “to take school aged children to permitted training as provided for in the Exercise and Sporting section.”

The whole, so-called “Golfgate” episode – or rather the hotel dinner that followed the Oireachtas society outing in Connemara – gave golf something of a bad rap in the middle of the summer and the country’s fight with the coronavirus, but, at golf clubs themselves, the public health guidelines and social distancing were adhered to very well.

Indeed, golf was one of the first sports to get the greenlight for some play earlier in the year when the Irish government’s initial roadmap was produced: a large number of measures were adopted the length and breadth of the country as golfers sought to adapt. Flagsticks remained in holes, bunkers went unraked, players arrived in their cars and headed straight to the first tee and then from the 18th green back to their car. Handshakes on the final green became obsolete.

So, will those golf clubs gather cobwebs or get further outings? The Yes/No Game deserves an answer both for those playing and for the significant number of those working in the indigenous golf industry.