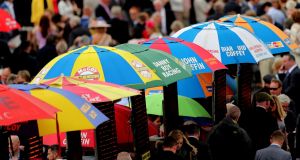 The impact of another six weeks with doors closed has been described as a ‘big blow’ to other bookmakers in particular. Photograph: James Crombie/Inpho

Casualties are all but inevitable in Ireland’s betting shop sector on the back of being closed for six weeks under new Level 5 coronavirus restrictions.

“It’s hard to see how any of the small businesses can survive,” admitted the chairperson of the Irish Bookmakers Association, Sharon Byrne, on Tuesday, a day after the Government moved to try and halt escalating rates of Covid-19.

That includes closing all but essential retail outlets which includes bookmaker shops.

Of the country’s almost 800 betting shops, nearly 650 are operated by the big three chains, Ladbrokes, Paddy Power and Boylesports.

However the impact of another six weeks with doors closed has been described as a “big blow” to other bookmakers in particular.

“The larger operators will have an online presence. But for those who are fully focussed on retail in Ireland it is a big blow,” Byrne said. “We weren’t surprised. It had been well tipped up that something was going to happen and Level 4 or 5 meant we were closed. It’s the same as all retail for our members.

“So for our staff it is very worrying. Is this going to be a yo-yo system: after Christmas and January will numbers go back up and how can any economy survive a third lockdown?”

Byrne pointed out that the prospect of another six weeks of restrictions means betting shops will have been closed for almost five months this year.

She said Government supports and subsidies are the only thing keeping some IBA members in business.

In other news Goffs have made several changes to its upcoming sales programme that had fallen within the six week restrictions timeframe. Sales can’t be held between now and December 2nd.

It means the Autumn yearling sale originally scheduled for November 4th-5th has been moved to January 12th-13rd 2021. The Autumn horses in training sale stays on November 5th but will held as a live online auction.

“Like much of the rest of the country, we did not anticipate a move straight to Level 5 but we fully respect the decision and objectives of the government and understand that, in this timeframe, it would not be responsible to attempt to hold a sale,” said Goffs chief executive, Henry Beeby.

1 Ireland 23 Georgia 10: How the Irish players rated
2 Ireland grind their way to grisly win over Georgia
3 Jim McGuinness: There is a way to save championship and make it competitive
4 Car sliced in half but Grosjean survives huge crash at Bahrain Grand Prix
5 Ireland’s autumn of discontent continues with abysmal Georgia showing
Real news has value SUBSCRIBE