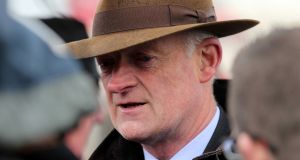 Willie Mullins has valuable domestic Graded races in his sights over jumps this weekend and a rare Group One target for Max Dynamite in Paris to boot.

Ireland’s champion National Hunt trainer famously won the 2016 Irish Leger with Wicklow Brave and that star performer is among Mullins’s big-race team at Tipperary on Sunday.

Now another dual-purpose stalwart, Max Dynamite, looks to have realistic hopes of top-flight flat race glory in the Qatar Prix Du Cadran which is off at 4.40pm Irish-time at Longchamp on Saturday.

Twice placed in the Melbourne Cup, the sole Irish raider is general 9-2 third favourite for the two-and-a-half mile feature which is regarded as the French Gold Cup.

Italian Andrea Atzeni teams up with the Irish hope in an eight-runner contest for which the local hope Holdthasigreen is likely to start favourite.

Atzeni has also been booked by Gavin Cromwell to ride Princess Yaiza in the Group Two Prix de Royallieu on the same Longchamp card.

Mullins has six starters at his local Gowran track on Saturday including Ballycasey who will try to repeat his 2016 triumph in the Grade Two PWC Champion Chase.

Last year’s winner A Toi Phil also lines up with Davy Russell on board. That leaves Rachael Blackmore to ride the Ryanair Chase winner Balko Des Flos on his first start of the season.

Balko Des Flos has a 169 rating to eclipse everything else in the race although crucially Ballyoisin has the advantage of race fitness and his favoured decent ground conditions.

There are a trio of Grade Three events at Tipperary and while Wicklow Brave and Quick Grabim can score for Mullins in the first two Le Richebourg looks a likely answer to the Like A Butterfly Novice Chase.

The one time classic hope Imaging returns to action in the Group Three Concorde Stakes where his stable companion Yulong Gold Fairy can also prove a major player.

1 Golf in Level 5 Covid restrictions: Clubs still waiting to hear if they can remain open
2 Hugo Keenan could start in changed Ireland team against Italy
3 Man United’s latest Parisian party more impressive than heist of 2019
4 Gordon D’Arcy: Ireland don’t need to do a Finn Russell on it
5 All-Ireland Under-20 football final postponed due to Level 5 Covid-19 restrictions
Real news has value SUBSCRIBE