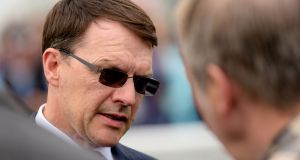 Trainer Aidan O’Brien: said after the Curragh that Mount Everest proclaimed the colt as having a “big massive engine”. Photograph: Inpho

Should Mount Everest wins Sunday’s Beresford Stakes there’ll probably be puns galore about him reaching racing’s peak next year. But such classic speculation won’t be all to do with his name.

Last year the Group Two feature at Naas contained two classic heroes among its five runners. The winner, Saxon Warrior, wound up landing the 2,000 Guineas. Kew Gardens finished only fourth but can count a St Leger among a pair of Group One wins in 2018.

That renewal came on the back of a 2016 Beresford victory for the subsequent Irish Derby and Leger winner Capri. He, along with Kew Gardens, remains in contention for next week’s Arc.

They’re just the two latest instalments on a historic roll-of-honour that contains such landmark figures in the sport as Nijinsky (1969) and Sea The Stars a decade ago.

Even that magnificent horse was beaten on his debut so it’s hardly a serious black mark against Mount Everest that he took three goes to win his maiden.

That came at the Curragh last month after which Aidan O’Brien immediately nominated the Beresford as a potential target and proclaimed the colt as having a “big massive engine.”

Since the champion trainer has won the Beresford a staggering 17 times - and is chasing eight-in-a-row on Sunday – it’s safe to say he knows what’s required to win the race. He saddles three of the seven runners including Sovereign who won his own maiden at Galway by no less than 14 lengths.

Ryan Moore flies back from Mendelssohn’s run in New York on Saturday night to ride Mount Everest though. On quick ground conditions the son of Galileo can go one better than his brother Yucatan, runner up to Capri in the race two years ago.

The triple Group One hero maintains a 110-handicap mark at 10 years of age which sees him with a clear chance on official ratings.

Six furlongs is short of his absolute best and he’s not the same proposition as in his Group One winning pomp. Gordon Lord Byron is also making a quick turnaround from a luckless trip to the Czech Republic last weekend.

However this looks a Group Three that’s fallen apart a little and Tom Hogan’s stalwart looks to have a fine opportunity to win his first race in almost 17 months.

Hermosa brings a third in the Moygalre Stud Stakes to the Weld Park Stakes and as a sister to the teak-tough Hydrangea she’s likely to find a two week turnaround little problem.

Jessica Harrington saddles Servalan and Trethias in the same race and the latter could be a solution.

She enjoyed a nightmare passage behind her stable companion Sparkle N Joy over ‘Champions Weekend’ at Leopardstown and is surely better than the bare form.

Falcon Eight is the unknown quantity of the Loughbrown Stakes but Free Eagle’s unbeaten brother will be a potential Group One stayer in 2019 if he can beat the 109 rated Twilight Payment this weekend.