Laurens takes a run at fifth top-flight victory at Newmarket 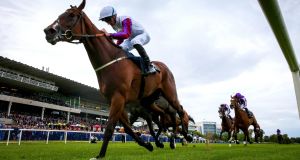 After lowering the colours of Alpha Centauri over Irish Champions Weekend at Leopardstown last month, Laurens has the chance to record a fifth career Group One victory at Newmarket this Saturday.

The Karl Burke-trained star is ante-post favourite for the Kingdom of Bahrain Sun Chariot Stakes after being one of a dozen fillies left in the mile highlight on Monday.

Laurens bounced back from disappointing over a mile and a half in the Yorkshire Oaks to inflict a shock defeat on Alpha Centauri in the Matron Stakes.

Alpha Centauri suffered a career-ending injury in the race but it was another top-flight win for Laurens, who earlier in the season won both the Prix de Diane and the Prix Alary in France. As a two-year-old she also scored at the top level in the Fillies Mile.

Saturday’s probable favourite will try to confirm Leopardstown form with Clemmie, who finished two lengths behind Laurens in third.

O’Brien scored last year with Roly Poly, while Alice Spring won in 2016. The Irish man also won the prestigious event a decade ago through Halfway to Heaven.

Clemmie has been installed a 5-1 third favourite behind Laurens, while another O’Brien hope, I Can Fly, is at 7-1. She’s another filly to have won over Champions Weekend, in her case the Group Two Boomerang Stakes.

The legendary French trainer André Fabre has supplemented Wind Chimes into the race as he tries to repeat his 2015 Sun Chariot victory with Esoterique. Wind Chimes was just nailed on the line by Recoletos in last month’s Prix du Moulin.

Billesdon Brook can boast Group One-winning from having beaten Laurens in a shock 66-1 success in last May’s 1,000 Guineas. She is set to return to the course and distance of her greatest triumph.