English raider completed double for jockey Chris Hayes, who had earlier scored aboard Cedars Of Lebanon 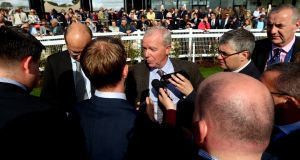 Unfortunately’s trainer Karl Burke: he indicated the colt may have one more run in Ascot’s Champion Sprint before retiring to stud. Photograph: James Crombie/Inpho

Jockey Chris Hayes cajoled Unfortunately into a dramatic return to winning form with a valuable Group Three victory at Naas on Sunday.

Last year’s Prix Morny hero had failed to fire in four previous starts in 2018. However, after looking in trouble for much of the six-furlong Renaissance Stakes, the Cheveley Park-owned stallion prospect flowered late under his new jockey and won in style.

The English raider completed a double for Hayes, who had earlier scored in the juvenile auction race aboard Cedars Of Lebanon.

“I know it didn’t look good at half way, but I thought he’d finish well, and he’s got there well in the end,” said Hayes who dead-heated on Son Of Rest in last weekend’s Ayr Gold Cup.

More big race success could be in prospect for the rider who is anticipating a potential fourth career Group One if the unbeaten juvenile Madhmoon makes it to Doncaster for the Vertem Futurity later in October.

Unfortunately’s trainer Karl Burke indicated the colt may have one more run in Ascot’s Champion Sprint before retiring to stud, and was full of praise for Hayes.

“It’s his first ride for me but he’s a lad I’ve followed for a long time, and he’s a good, strong aggressive rider,” said the Yorkshire trainer, who hopes to run Laurens in this Saturday’s Sun Chariot Stakes at Newmarket.

“I’d say he [Unfortuantely] will go to stud at the end of the season. He was a very good two-year-old, and he’s shown he’s still got some ability. I’m sure he’ll be a popular commercial little horse,” said Burke.

The stalwart 10-year-old Gordon Lord Byron finished fourth in the Renaissance a week after a trip to the Czech Republic.

“Prague might have taken its toll, but he finished well and moved great,” said his trainer Tom Hogan. “We could look at the Challenge Stakes at Newmarket for him next.”

Cedars Of Lebanon rallied to good effect in her race to score for Patrick Prendergast. However, Hayes did pick up a two-day suspension for his use of the whip.

Racing opened with an impressive debut victory for Aidan O’Brien’s two-year-old Magna Grecia. There was drama in behind as Stella D’italia appeared to clip heels before coming down. Sandstorm Annie was hampered and unseated her jockey. Both jockeys, Niall McCullagh and Robbie Colgan, were unhurt. Afterwards, Colm O’Donoghue, who rode Morpho Blue in the race, got a seven-day suspension for careless riding.