Racing regulator has ground to make up in credibility stakes 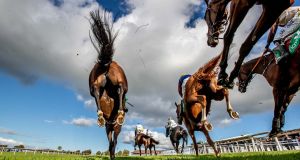 In recent years racing’s regulator has endured repeated blows to its reputation when it comes to doping.

If 2019 does prove to be the birth of a brave new anti-doping dawn for Irish racing then 2018’s labour pangs still won’t be easily forgotten.

So far this year there have been 21 positive tests for prohibited substances. They include 13 ‘winners’ disqualified for failed drug tests. There were five positive results in each of the three previous years. More cases are pending.

This dramatic spike has provoked confusion and acrimony in a sport already fighting a battle for credibility in terms of doping.

In 2014 the leading trainer Philip Fenton was disqualified after being found guilty of possessing banned animal medicines. They included anabolic steroids.

In the same year another high profile trainer, Pat Hughes, was also found guilty of possessing unauthorised animal medicines, including an anabolic steroid.

Hughes’s brother, John Hughes, a former Department of Agriculture veterinary inspector, was ‘warned off’ for five years in 2014 after pleading guilty to possession of banned animal substances.

They included six kgs of the anabolic steroid Nitrotain which was described as being of “commercial” quantity.

It was a seismic shock, both to Irish racing’s reputation and any smug assumptions about doping being a problem for other jurisdictions. In response an anti-doping task force issued a report at the start of 2016 which recommended sweeping reforms.

Central to it was the need for traceability of thoroughbreds throughout their lives and overall agreement allowing vets from the Irish Horseracing Regulatory Board onto unlicensed premises such as stud farms.

There ensued two and half years of wrangling and prevaricating before an ‘Industry Wide Policy on Prohibited Substances & Doping Control’ was finally approved by the board of Horse Racing Ireland in July.

It is an industry-wide framework aimed at providing anti-doping credibility in time for January 1st and the start of the 2019 foal crop. Despite there still being a glaring issue in terms of prior notice it has been described in ‘landmark’ terms - a sort of Drugs D-Day.

But securing such credibility first requires regulatory credibility to be restored. And either as the old Turf Club, or in its new rebranded guise as the Irish Horseracing Regulatory Board, that’s a formidable job of restoration.

In recent years racing’s regulator has endured repeated blows to its reputation when it comes to doping.

The current spate of positive drug tests are embarrassing for a sport always open to caricature about bandy-legged, syringe-toting chancers

It was caught horribly unaware when Department of Agriculture officials lifted the lid on steroids and left to look sidelined by the fallout which made previous presumptions about no positives meaning no problems seem desperately hollow.

Since then British officials have made a point of drug testing some Irish -trained horses entered for races in their jurisdiction. They insist it is routine which will sound more convincing when reciprocity becomes similarly routine.

In February the IHRB ended a 22-year association with the BHP Laboratory in Limerick at a reported settlement cost of €500,000.

The move came after a false positive result for an anabolic steroid. The trainer of the horse involved asked to have the ‘B’ sample tested elsewhere. It returned negative. Asking for that ‘B’ sample test saved both the trainer’s licence and reputation.

From February samples have been sent to a laboratory in England and a dramatic spike in positive tests has occurred. Maybe it is coincidence. But this is a game not noted for its wide-eyed romantic population. A further erosion of confidence has been the inevitable outcome.

Since there’s general agreement that trainers haven’t dramatically altered their methods and practises in 2018, equally inevitable are fundamental queries about how effective doping procedures were before.

Whatever about the past, the current spate of positive drug tests are embarrassing for a sport always open to caricature about bandy-legged, syringe-toting chancers injecting to win or lose as required.

It’s a context that allows some reassurance be taken from how the majority of positives have been related to horses failing tests for legitimate medications which simply haven’t cleared an animal’s system in time for race-day.

Along with a pre-Brexit focus on passport irregularities and vaccinations, recent doping headlines can be portrayed in terms of the horse game in Ireland starting to at long last to get its drugs house in order.

Whatever the portrayal though the most critical element to any new drugs dawn will be persuading the public that Irish racing is serious about catching cheats. And given other caricatures about a famously insular sector sticking together that must mean a new transparent dawn.

The two most worrying positive tests to date in 2018 have been for cobalt, a naturally occurring substance in horses but when administered in large quantities is suspected of increasing red blood cells similar to the blood-doping agent EPO.

Anyone looking for clarity was left frustrated by official statements which seem scant, ambiguous, open to interpretation

Last week, Pat Kelly, who trains the Cheltenham Gold Cup favourite, Presenting Percy, was fined €1,000 by an Appeals & Referrals panel after a point to point winner he saddled in March tested positive for elevated levels of cobalt.

The week before, trainer John ‘Shark’ Hanlon got a suspended 18-month licence suspension after his Galway winner festival Camlann tested positive for cobalt. Both men said they didn’t know how the elevated readings occurred.

In the environment where there is an overarching rule about trainers being generally responsible for the horses in their care many legitimate questions remained.

Anyone looking for clarity was left frustrated by official statements which seem scant, ambiguous, open to interpretation and which resonate with an old-school attitude of revealing the bare minimum.

That’s not good enough, neither for the sport overall, nor for a regulator with so much ground to make up in the credibility stakes.

By definition regulators are an easy and convenient target. There may also be legal issues behind any public furtiveness.

However when it was rebranded the IHRB said it aimed to set standards worldwide. Its mission statement used buzzwords such as ‘accountability’ and ‘transparency’. The best hope of a new anti-doping dawn is for that mission statement to become more than just jargon.