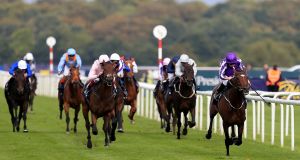 Bookmakers believe Kew Gardens is the most likely of Aidan O’Brien’s potential runners to earn a place among an exclusive group of Irish racing stars in Paris this Sunday.

It is 60 years since Ballymoss became the first Irish trained winner of the €5 million Qatar Prix de l’Arc de Triomphe.

Since then just half a dozen other horses from this country have tasted success in Europe’s premier all-aged contest.

They include legends such luminaries as Sea The Stars (2009) and Alleged who completed back-to-back wins for Vincent O’Brien all of 40 years ago.

Found led home an unprecedented Arc 1-2-3 for Aidan O’Brien a couple of years ago and the current master of Ballydoyle – who also scored with Dylan Thomas in 2007 – will hope to emulate his predecessor on Sunday by winning French racing’s greatest prize for a third time.

O’Brien is responsible for six of the 22 horses left in the Arc at Monday’s forfeit stage. They are topped by Kew Gardens who landed the Grand Prix de Paris over the Arc course and distance on Bastille Day last July.

Kew Gardens has subsequently won a classic in the English St Leger over two weeks ago and is a general 10-1 shot for Sunday’s highlight which is back at its traditional Longchamp home after two years at Chantilly.

O’Brien has also left in the Irish Leger winner Flag Of Honour and the older horse Capri who won last year’s English Leger but beat only one home in the Arc a couple of weeks later behind Enable.

John Gosden’s superstar filly is a red-hot 5-4 favourite to become just the eighth horse to win the Arc back-to-back. She could be joined by her stable companion Cracksman on Sunday but only if ground conditions get softer in Paris.

That looks unlikely at this stage which is good news for the second favourite Sea Of Class who needs to be supplemented into the Arc on Wednesday at a cost of €120,000.

“I think our plan is to supplement her,” Sea Of Class’ trainer William Haggas indicated. “The weather forecast looks dry and we’re happy with her so that’s the idea.”

Enable’s rider Frankie Dettori already holds a record five wins for a jockey and the record trainer, Andre Fabre, will aim to win the Arc for an eighth time.

Fabre’s four entries are topped by the Grand Prix de Saint-Cloud winner Waldgeist who warmed up with an impressive victory in last month’s Prix Foy on Arc Trials Day.

O’Brien’s Group One ambitions at Longchamp on Sunday may also include Broome in the Prix Jean Lucgadere and Pink Dogwood in the Prix Marcel Boussac for juveniles. Magic Wand is an option for the Prix de l’Opera.

Before Arc weekend O’Brien’s two year old focus will be on Dundalk’s Friday night card where the €1.6 million purchase Old Glory is entered for the Listed Star Appeal Stakes.

Nine horses were left in the race named after the 1975 Arc hero at Monday’s entry stage including Old Glory who earned 2019 Derby quotes after an impressive debut success at Naas recently.

The Invincible Spirit colt Magna Grecia managed the same on Sunday with his own impressive Naas debut and O’Brien unveils some more two year olds at Tuesday’s fixture back at the Kildare track.

The fact that Ballydoyle’s two year olds are increasingly winning first time out will encourage hopes for the Dark Angel colt San Andreas in the first of the maidens.

Among O’Brien’s trio in the second maiden is Eminence who is by Sea the Stars, another sire not usually associated with Ballydoyle. The presence of Donnacha O’Brien on his back suggests he has progressed from his Leopardstown debut.

Polly Douglas beat her stable companion Dash d’Or at Navan on Saturday but the weight swing for half a length can help a reverse in the opening handicap.

1 Australian rugby staring into abyss as another crisis hits
2 Garry Ringrose to stay with Leinster as he signs two-year central contract
3 My favourite sporting moment: Game, set and couch as Borg takes down McEnroe
4 ‘For 25 minutes I ran out of oxygen’: Pepe Reina on his coronavirus battle
5 Six Nations rugby needs to be protected for terrestrial TV
Real news has value SUBSCRIBE

Playoffs set to be moved again as Uefa prioritise European club competitions 14:59
Harrington would prefer 12 picks over delayed Ryder Cup 09:06
Australian rugby staring into abyss as another crisis hits 09:03
Ringrose set for new central deal; memories of Björn Borg at Wimbledon 06:51
Seán Moran: What nostalgia tells us about how the GAA sees itself 09:05
Here is your handy guide to sport on television this week