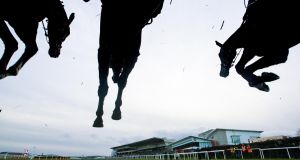 Racing’s head of anti-doping has urged trainers to adopt a ‘buyer beware’ policy when it comes to giving supplements to their horses.

Such use is likely to come under focus again on Tuesday when a case involving a point-to-point winner trained by Co Galway-based Pat Kelly is due to be heard by a Referrals Committee panel.

Kelly, who trains the favourite for next year’s Cheltenham Gold Cup, Presenting Percy, produced Warendorf to win a point-to-point at Belclare last March.

The horse reportedly later tested positive for cobalt with a commonly used supplement believed to be central to the case.

Cobalt is a naturally occurring substance in horses. But it is believed excessive levels increase the number of blood cells and can produce greater ability to carry oxygen and boost endurance in a manner similar to EPO.

Cobalt has already featured among a dramatic spike in positive tests for prohibited substances in Ireland this year.

Last week five winners were disqualified by a Referrals Committee panel at Irish Horseracing Regulatory Board HQ including the John ‘Shark’ Hanlon-trained Camlann, who tested positive for elevated levels of cobalt after winning at the Galway festival in August.

Hanlon received a suspended 18-month sentence and was fined €7,000. He has indicated he will appeal the penalties.

During that hearing Professor Stuart Paine of Nottingham University said analysis indicted Camlann had either been injected with a vitamin B12 product containing cobalt, or been given an extremely large amount of such a product by mouth, within 12 hours of the sample being taken.

Hanlon stated that the horse received an oral supplement which contained cobalt but that it was not administered on the day of the race. He added he could not provide an explanation for the source of the positive test.

Another trainer, Steve Mahon, saw two winners, Trump Sixteen and Rocky Court, disqualified after positive tests for arsenic, which was linked to the trainer’s feeding of seaweed to his horses.

Penalties were waived in relation to that. However, Mahon was fined €1,000 after another of his horses, Hugh Divots, tested positive for cobalt.

Mahon reported he had used a multivitamin supplement due to Hugh Divots being a “shy feeder” and the supplement was labelled as containing 10mg cobalt per 60ml day dose.

The Kelly referral is one of seven more prohibited substance cases due to be heard soon in what is proving an embarrassing spike of positive drug tests for Irish racing.

A dozen winners, including four in point-to-points, have already been disqualified in 2018 with 21 positive tests in total to date. There were five in each of the two previous years.

The IHRB has put the spike down to “bad practice” rather than anything more sinister. It has organised a series of seminars to advise trainers, vets and stable staff on the proper use of legitimate medicines which are prohibited substances if still in a horse’s system on race day.

The second of those seminars is at the IHRB on Wednesday. Some trainers have privately expressed concern that some advice at the first seminar earlier this month went over their heads in terms of detail. They also feared that advice regarding supplements suggested they shouldn’t be used at all. But that has been rejected by the IHRB’s head of anti-doping.

“All we are saying in relation to supplements is be careful – buyer beware,” Dr Lynn Hillyer said.

“A lot supplements may not have what they say on the tin, or labels may be incorrect if they’re not properly subject to quality control. They do exist and they are used and they are available, particularly online.

“What we are saying is if they are labelled, look at the label and ask advice from a vet, or whoever, which will help you understand what’s in there and if you are putting yourself at risk.

“Most people are wondering about cobalt and the thresholds for it. The advice is that a horse, on the day before the race, must not have more than 1mg intravenously and 5mgs by mouth as a total dose.

“So if you’re giving four supplements the day before a race, and they each have 1mg (of cobalt,) and it’s all oral, you’ll be fine. And if you’ve any doubts leave it off the day before the race. That’s the kind of advice we’re giving and I think it’s clear,” she added.