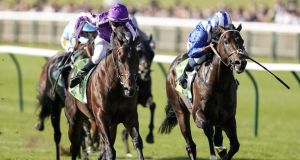 Ten Sovereigns maintained his unbeaten record with victory in the Juddmonte Middle Park Stakes at Newmarket.

The son of No Nay Never made a spectacular debut at the Curragh in late August and returned to the track to win the Group Three Round Tower Stakes on his latest appearance.

With trainer Aidan O’Brien and his son Donnacha having already landed the Royal Lodge with Mohawk and the Cheveley Park with Fairyland earlier in the afternoon, Ten Sovereigns was a prohibitively priced 8-13 favourite to provide the Ballydoyle team with a big-race treble.

The odds-on shot travelled powerfully on the heels of the leaders for much of the way before hitting the front racing inside the final two furlongs.

Simon Crisford’s Jash, who was stepping up markedly in class following novice wins on the July Course and at Salisbury, covered the move and briefly threatened to make a real race of it.

However, Ten Sovereigns found more once tackled and passed the post half a length to the good.

O’Brien said: “He learnt plenty. He is a very fast horse with a lot of speed.

“It is exciting for the lads as they have the stamina in the Galileo mares and now they have justified having the No Nay Never and Scat Daddy speed.

“That was the exciting thing today – he was going to Group One standard and you don’t really know how they will go until you run them.

“I’m delighted and Donnacha gave him a super ride. Donnacha said when he came in that it was the first time he showed greenness and I was worried about that as the first day he ran he galloped up the Curragh by himself.

“It wasn’t ideal to go back so quick for the next one, but obviously we were delighted that he did go back.”

Asked whether Ten Sovereigns could return to Newmarket for the Dewhurst Stakes on October 13th, the trainer added: “I think it might not be the right thing to do. It’s not long since he started, we rushed two runs in together and he just about made it back for this one.

“I think to be fair to him the best thing will be to leave him alone [until next year], but the lads will decide.

“He is very exciting. He probably won’t get much further than a mile, if he gets a mile.”

Fairyland narrowly denied The Mackem Bullet for a second time this season in a thrilling climax to the Juddmonte Cheveley Park Stakes.

The O’Brien-trained mare claimed her third win from four starts when seeing off Brian Ellison’s The Mackem Bullet by a nose in the Lowther Stakes at York in August and it was a similarly close fought battle in this six-furlong Group One.

Both horses were positioned prominently from the off, but 6-1 chance Fairyland looked to be travelling much the better entering the final furlong.

However, 25-1 shot The Mackem Bullet refused to go down without a fight and there was just a neck between them at the line.

O’Brien said: “We’re delighted with her. We thought she would come forward from York and she did.

“She is a lovely filly. She was just back at York after having a break, having gone through the whole thing [bug at yard]. They were all very sick.

“Donnacha gave her a peach of a ride and she has loads of speed. We always thought she would stay and maybe get a mile, but she is not short of speed.

“She has a lovely mind and relaxes. I’d probably not run her again [this season].”

Mohawk led home a one-two-three for O’Brien in the Royal Lodge Stakest.

The Ballydoyle handler had saddled five previous winners of the Group Two contest and possessed a strong hand as he went in search of a sixth.

The outsider of the trio, Sydney Opera House, cut out much of the running alongside Mark Johnston’s Victory Command and still held a narrow advantage racing inside the final two furlongs.

However, Mohawk soon took over in the hands of the trainer’s son Donnacha and powered clear for a decisive one-and-a-quarter-length success.

Sydney Opera House was a clear second ahead of another stablemate, Cape Of Good Hope, in third.

The previously unbeaten Beatboxer was the 7-4 favourite for John Gosden and Frankie Dettori, but he was in trouble from an early stage and trailed home last of the seven runners.

O’Brien said: “He is a lovely horse and has been progressing lovely. He won second time out then he ran very well in Group races after that.

“He loved going a mile and he will be a lovely middle-distance horse.

“He might not run any more this year and be put away to start in the Classic trials. I’d imagine he has done enough [for the season], that is what we’re thinking at the moment, but that can change.”

Of the placed horses, the trainer added: “We were very happy with them as well. Sydney Opera House is a lovely, middle-distance horse and Cape Of Good Hope is the same.

“He [Cape Of Good Hope] has had a bit of time since he ran, but he ran a lovely race and has been progressing with every run.”