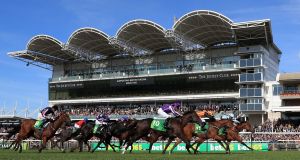 A brace by Ten Sovereigns and Fairyland at Newmarket on Saturday brought the Ballydoyle team’s Group One haul for 2018 to 12, providing more proof of how the top-flight drought that had affected them in the summer is long past.

A 306-1 four-timer at Naas on Sunday underlined their renewed wellbeing and Cypress Creek’s Group Three victory in the Loughbrown Stakes provided an indirect boost to O’Brien’s Arc hopes.

“He’s Kew Gardens’s work companion and that determines a lot of his time,” O’Brien said. “The plan is we are going towards the Arc with him [Kew Gardens]. There’s a forfeit stage in the morning and he’ll be left in. Hunting Horn is going to be left in and Capri as well.”

Kew Gardens bookended the two month Group One drought between his Grand Prix de Paris victory in July and the St Leger a couple of week ago.

Now the colt will try to give his trainer a third Arc success by taking on the defending champion Enable when Europe’s greatest all-aged race returns to the revamped Longchamp track.

The Arc was run at Chantilly for two years while the rebranded ‘Paris-Longchamp’ was being rebuilt and Found famously led home a Ballydoyle 1-2-3 there in 2016. Dylan Thomas also won the Arc for O’Brien at its traditional home in 2007.

Kew Gardens is a general 12-1 fourth choice in the Arc market behind the 5-4 favourite Enable. Sea of Class is a 5-1 second best while Waldgeist is the shortest of the local hopes in ante-post betting.

It’s 60 years since a Leger winner was successful in France’s greatest race and Vincent O’Brien’s Ballymoss only managed it a year after his Classic success.

More encouragement that the world’s most powerful bloodstock operation is back firing on all cylinders again, and might help Kew Gardens buck the trends, came in New York on Saturday night.

Mendelssohn ultimately finished only third in the Jockey Club Gold Cup at Belmont but ran an admirable race considering he chased a frantic pace throughout.

Ryan Moore’s mount overhauled the favourite Diversify in the straight but was inevitably vulnerable to Thunder Snow’s challenge although Godolphin’s star ultimately got mugged himself on the line by Discreet Lover.

Immediate reaction by some firms was to lengthen Mendelssohn to 25-1 for the Breeders Cup Classic. However Churchill Downs in five weeks time remains the Irish horse’s target.

“He progressed from his last run to Saturday night and we thought he might progress more so we’re delighted,” O’Brien said. “There was plenty of pace on. In that part of the world they don’t go slow!”

Moore made it back to Naas to ride the first three of O’Brien’s winners. However the English jockey had to give best in the featured Group Two Beresford Stakes as the 11-8 favourite Mount Everest was chinned on the line by his stable companion, Japan.

Seamus Heffernan did the steering on the 11-2 winner and it was a third victory in the historic juvenile contest for the jockey. It pales in comparison though to the 18 Beresford successes O’Brien can now boast and this was an eighth in a row.

The Beresford has a tradition of identifying future Classic winners and Japan was given 25-1 quote for next year’s Derby.

Three of O’Brien’s previous winners, including the 2017 victor, Saxon Warrior, went on to land Doncaster’s newly-titled Verterm Futurity and Japan will try to do the same.

“He was very green the first day and won nicely the next [at Listowel]. We thought he would come forward again from this and he probably will,” O’Brien said.

“He travelled well and done everything right so you’d have to be delighted. The second did nothing wrong too. There were no prisoners. It was an honest, straight-forward race,” he added.

Ascot’s Fillies Mile will be next for Hydrangea’s sister, Hermosa, who made most to win the Weld Park Stakes.

“She’s a lovely, laid-back filly and I think she’s crying out to go up to a mile,” said O’Brien who’d earlier unveiled Magna Grecia to make an impressive winning debut.

The son of Invincible Spirit got 33-1 quotes for next year’s Derby and his trainer said: “He’s lovely. He was just ready to start today. He’s a possible for the Killavullan. He’s a big, strong powerful horse. He was green but when he got straightened up he found plenty.”

Ger Lyons had endured a quiet spell in terms of winners but it came to an end in the final handicap when the 10-1 shot Omran pounced late to beat his stable companion Bucky Larsson.

“It’s been a frustrating month. The horses haven’t been running bad. They’ve been running their races and just being chinned,” Lyons said. “It’s what you have to get used to over here when you’re taking on who we’re taking on.”