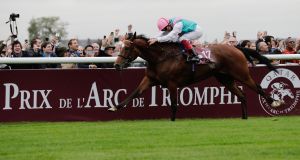 Enable will break from stall six when she defends her crown in the Qatar Prix de l’Arc de Triomphe on Sunday.

John Gosden’s filly was a brilliant winner of Europe’s premier middle-distance prize at Chantilly last season. She has missed much of the current campaign through injury, but following a foot-perfect comeback at Kempton last month she is red-hot favourite to become the eighth dual Arc victor at ParisLongchamp this weekend.

Enable is set to face 18 rivals, with stablemate Cracksman the only horse to withdraw before Thursday’s final declaration stage.

The William Haggas-trained Sea Of Class was handed a far from ideal starting berth in stall 15 and there may be a further complication as her intended jockey James Doyle gave up his rides at Lingfield and Chelmsford on Thursday after feeling unwell.

Andre Fabre, who has saddled a record seven Arc winners but has not struck gold since Rail Link’s victory 12 years ago, is represented by Waldgeist (13), Cloth Of Stars (nine) and Talismanic (eight).

Prix du Jockey Club winner Study Of Man is widest of all in stall 19, with Clincher nearest the rail in stall one.

Laurens will face nine rivals in the Kingdom of Bahrain Sun Chariot Stakes at Newmarket on Saturday.

The three-year-old filly has won six of her nine career outings for Karl Burke, with her only defeats coming behind Freddy Head’s high-class Polydream last season, Billesdon Brook in the 1000 Guineas and when she seemingly failed to stay in the Yorkshire Oaks.

Back at a mile last time out, she landed the fourth Group One of her career in the Matron Stakes on Irish Champions Weekend when beating Alpha Centauri, who was subsequently retired due to an injury sustained in the race.

“Laurens looks to be in great form and is spot on physically. Her weight is almost identical to when she left the yard for Leopardstown to run in the Matron. Her coat is in perfect condition and I am very happy with her,” said Burke.

“There are no indications whatsoever that the long season is taking its toll. We purposely gave her a midsummer break after the Diane to avoid that with her autumn campaign in mind.

“She has run at Newmarket twice before, winning a Group One and finishing second in a Classic, so the straight mile clearly suits her. There is a bit of rain forecast prior to race time, so conditions should be perfect for her.”

Laurens will face Billesdon Brook once more, with Richard Hannon hoping a return to Newmarket will help her bounce back to winning ways after defeats in the Coronation Stakes and the 10-furlong Nassau at Goodwood.

Andre Fabre supplemented the Coolmore-owned Wind Chimes earlier in the week after she was only narrowly beaten by Recoletos in the Prix du Moulin last time.

Aidan O’Brien is represented by Happily, a dual Group One winner at two but without a success this season, Boomerang Stakes victor I Can Fly and Clemmie, last year’s Cheveley Park heroine.