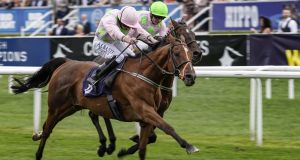 Champion jumps trainer Willie Mullins suspects he may have discovered a rare Group One opportunity in France on Saturday.

They include the Mullins pair Thomas Hobson and Max Dynamite who were first and second in last month’s Doncaster Cup.

That was a Group Two contest . But with both Rich Ricci-owned horses avoiding another tilt at next month’s Melbourne Cup, a major European Group One prize now looks to be well within their capabilities instead.

“Looking at the forfeits it looks ideal for either horse. It’s going to be fast ground and both have shown recent form on fast ground. Both probably need the trip [two and a half miles] these days as well. It could be an opportunity.

“I left them in with a view to one going. But maybe we should reconsider and send both. One will definitely go. I’ll have to decide in the next day or so if we send the other,” Mullins said on Tuesday.

Andrea Atzeni has already been booked by Mullins to ride in the Cadran which was last won by an Irish horse with Alandi in 2009. Mullins tasted Group One success on the flat when Wicklow Brave sprang a shock in 2016 Irish St Leger under Frankie Dettori.

The 2015 Cadran winner, and last year’s runner-up, Mille Et Mille, is again likely to line up at the weekend while Montaly is the sole English possible in a Group One that looks to have cut-up significantly.

Max Dynamite and Thomas Hobson were third and sixth respectively in last year’s Melbourne Cup. It was Max Dynamite’s second time to hit the frame having finished runner-up at Flemington in 2016. Mullins has decided against sending them ‘Down Under’ again.

“They would have had to be in quarantine last Thursday so they can’t go. I’ve nothing going to Australia, ” he said.

“He’s unlikely to go with the prevailing ground conditions. We’ll wait for softer going with him,” he said. “He’s alright after Korea. He didn’t really get a race out there. The travelling was the only thing. But he seems okay.”

Mullins has enjoyed an unprecedented level of summer success over the jumps with 86 winners worth almost €1.5 million in prizemoney already secured in Ireland before his major National Hunt stars start to return to action.

He has entered his 2016 winner Ballycasey in this Saturday’s Grade Two PWC Chase at Gowran although the Cheltenham festival winner Balko Des Flos looks to dominate the 15 entries left in.

“I don’t have any big plans for the big horses to come out yet. It’s still summer ground and I’m very conscious of that,” Mullins said.

He does however have a runner at Cork flat card on Wednesday. True Self lines up in a mile and a half maiden and the former dual-bumper winner could put some regally-bred but modestly-rated opposition in their place.

Colm O’Donoghue rides City Ballerina against True Self and the classic winning jockey’s other ride at Cork will be Minnie Haha in a mile maiden.

O’Donoghue has confirmed he has decided against appealing against a seven day suspension for careless riding he picked up at Naas on Sunday.

Minnie Haha’s opposition includes Spiorad who carries the presidential colours on what will be just his second career start. The first saw the son of Invincible Spirit finish third at Gowran in June, a performance to suggest a late maiden like this should be within his grasp.

However Spiorad will have to get the better the 92-rated Snowflakes, a sister to no less than the dual-Guineas heroine Winter. She failed to fire on her sole start of year on heavy ground at Listowel last month. But she could be a very different proposition on the forecast fast surface.