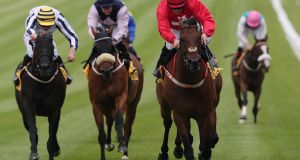 Tom Hogan will let the dust settle on Gordon Lord Byron’s defeat in the Czech Republic on Saturday before considering future targets.

The globetrotting 10-year-old can count Group One wins in Britain, Ireland and Australia among his 16 career victories, but has failed to add to that tally so far in 2018.

He broke new ground over the weekend after travelling to Velka Chuchle in Prague for the EJC Leram Million, but could only finish fifth.

Hogan said: “He’s back home in Tipperary and seems OK.

“The ground was a bit loose on top and he just couldn’t get any real traction on it.

“The flight was delayed going out and we had a few travel problems and it just didn’t work out on the day.

“It was an experience. The people there were very friendly and the hospitality was good.

“I think he still made about £4,000 for finishing fifth and he’s earned money in every country he’s visited.

“We’ll evaluate the situation and see how he is in the next couple of days.”

Gordon Lord Byron’s big-race entries include the Renaissance Stakes at Naas on Sunday week, the Concorde Stakes at Tipperary on October 7 and Challenge Stakes at Newmarket on October 12th.