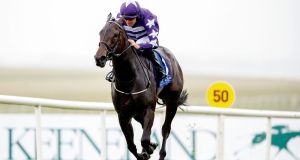 Lady Kaya will bid to give Sheila Lavery a maiden Group One success at Newmarket. Photograph: Bryan Keane/Inpho

Co. Meath trainer Sheila Lavery has confirmed the prestigious six-furlong highlight is the objective for Lady Kaya who will try to confound some of racing’s most powerful operations at Newmarket.

The filly has already confounded the sales ring having finished runner up in the Group One Moyglare Stud Stakes earlier this month and in winning a Curragh maiden by a staggering ten lengths in August.

It’s a profile that represents quite a feat for a horse bought for just €15,000 as a foal and who failed attract a bid of more than €12,000 this time last year at the Tattersalls Ireland September Yearling Sale in Fairyhouse.

The 2018 Tatts Sale starts on Tuesday and Lavery is among many already checking over the 550 yearlings that will be on show. But having taken out a licence just six years ago the popular Summerhill trainer is on the verge of a career highlight this weekend.

"The plan is to go and Robbie (Colgan) will ride but I can’t take any credit if she does it. That will be all down to her,” Lavery said. “I think dropping back to six furlongs will be ideal for her at this stage and Robbie felt at the Curragh the other day that she’d go on better ground.”

With Group One black-type already secured, and a potential classic campaign beckoning in 2019, Lady Kaya is a very valuable proposition. Lucrative offers have been turned down however and she continues to race in the colours of Lavery’s niece, Joanne.

"My niece bought her as a foal. But she cut herself badly and when she came to the sales she just looked backward. It just shows how life can work for you.

"It’s funny how it’s worked out because if she hadn’t cut herself I wouldn’t be training her. Had she gone in looking the way she should have she would have sold. But when she wasn’t Joanne put her into training with me,” Lavery added.

Lady Kaya originally jumped to prominence when beating no less than Saturday’s hugely impressive Gowran winner Pink Dogwood by ten lengths in her maiden. She is as short as 6-1 to provide Lavery with a first ever top-flight success at the weekend.

The Cheveley Park betting is headed by the Prix Morny heroine Pretty Pollyanna while Aidan O’Brien’s pair Fairyland and So Perfect are also prominent in the ante-post market.

The prospect of the Rowley Mile course will be an enticing one for Robbie Colgan. The former jump jockey has established himself with a vengeance on the flat this year largely through the support of the Lavery team.

Colgan still juggles the flat with riding over jumps and the day after Lady Kaya found only Skitter Scatter too good in the Moyglare he was in action over hurdles at Galway.

His focus on Monday though will be on three rides for Lavery at Fairyhouse’s flat fixture which takes place on the eve of the sales which will be held across the road from the tack.

The trio includes Breaking Story who also won his maiden under Colgan at the Curragh by making a mockery of 33-1 odds a month ago.

Breaking Story has another Gowran weekend winner, Circus Maximus, behind him in fifth on that occasion and also drops in trip to six furlongs for the Ballyhane Blenheim Stakes.

"I’d just be a bit worried that six furlongs might be a bit sharp for him,” Lavery admitted. “I didn’t have him entered up in any of the early closing races so there really isn’t much else for him. He’ll take his chance and we’ll see how he gets on.”

But it looks significant on official ratings that Donnacha O’Brien is on board last week’s easy Naas winner All The King’s Men rather than Isle Of Innisfree.

The third Ballydoyle contender, Fantasy, carries 8.12 and if Seams Heffernan’s mount emerges best it will be quite a boost for her stable companion Ten Sovereigns.

That exciting and unbeaten colt is odds-on in some lists for this Saturday’s other Newmarket Group One, the Middle Park Stakes, after two impressive Curragh victories of his own.

Monday’s Fairyhouse card also sees Still Standing try to regain winning form in the finale after failing to justify favouritism over ‘Champions Weekend’ while Jim Bolger’s Flow of Words makes a quick reappearance after his Gowran debut on Saturday.

In other news top English trainer John Gosden isn’t ruling out an ambitious tilt at the Breeders Cup Classic on dirt for his star three-year-old Roaring Lion.

The colt has already won the Eclipse, the Juddmonte International and the Irish Champion Stakes this season and will try next for Ascot’s Champion Stakes next month if ground conditions don’t get too soft.

“If it was heavy he wouldn’t run at Ascot. But if it was good to soft he would run as he has won on it before,” Gosden said on Sunday.

“If he went to the Breeders Cup it could be the mile and a half on turf or we could have a look at the Classic. He is a mile and a quarter horse so you would consider the classic as well as the Turf,” he added.