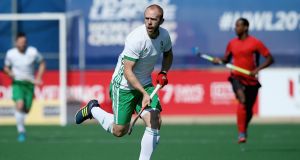 Eugene Magee: played in Rio as part of the first Irish team to qualify for an Olympic Games and he also scored against Germany. Photograph: Jan Kruger/Getty for FIH

This week’s retirement of Eugene Magee as Ireland’s most capped men's hockey player with 295 appearances was undoubtedly prompted by Ireland’s failure to reach the Olympic Games this summer.

The series against the Canadians in Vancouver has had a profound lasting effect with Ireland now not having anything to play for in 2020. The former hurler is the second international player to leave with Chris Cargo deciding to step away from the game at the top level last December.

Had Ireland won the two-leg Canadian series Magee would still be playing with Ireland and pushing his number of caps to over 300. For such a talent, who leaves with 60 international goals, Tokyo would have been a fitting finale to a career that, since his debut in 2005, unquestionably makes him one of Ireland’s best players of any era.

“I have enjoyed 15 years as part of the Irish men’s hockey team and it has been my privilege to represent my country,” said the Banbridge man.

But this year could end up being a year of continued change in the game. While the decision has been made by Hockey Ireland to extend Mark Tumilty’s contract as head coach for the Irish men’s squad in a full-time capacity, until December 2020, nothing is guaranteed beyond that.

Ireland could have a different coach at the end of the year as traditionally international coaches come into the market after major tournament cycles such as the Olympics.

By then the older players in the Irish group will have to come to a decision on whether another three years and a chance to chase the dream of Paris 2024 is a commitment they are prepared to make.

Fittingly, Magee played in Rio as part of the first Irish team to qualify for an Olympic Games and he also scored against Germany. He has set a standard everyone who follows should aspire to reaching.