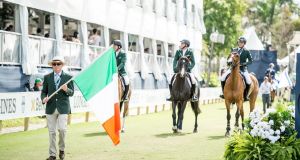 There were four Irish riders among the six who qualified for the jump-off of the Equinimity WEF challenge cup in Wellington, Florida on Thursday but they had to settle for the placings behind the sole Brazilian in the timed round, Yuri Mansur.

Sligo native Darragh Kerins was the first to take on the shortened track of the 1.50m competition, going clear in 37.76 to set the standard on NRG Farm’s Carlos JD Z. Co Cork-born Billy Twomey also left all the poles intact with his own and Sue Davis’s Chat Botte E.D. but in the slower time of 39.34.

That pair remained first and second as both Offaly’s Darragh Kenny and Down’s Conor Swail had a pole down apiece with Scarlett du Sart Z (35.45) and GK Coco Chanel (36.94). As the USA’s Rich Fellers had withdrawn Ninou 2 from the second round, the only non-Irish rider to go against the clock was Mansur who, last in, partnered Everglade Santo Antonio to claim first place with a double clear in 37.03.

Week six of the Winter Equestrian Festival at the Palm Beach Equestrian Center commenced on Wednesday when Irish riders were also along the placings in both FEI-affiliated classes.

There is five-star action this week in Florida at the nearby venue of Deeridge Farms where the first Longines FEI Nations’ Cup of 2020 takes place on Sunday.

Ireland has an excellent record in the Wellington Nations’ Cup having won in 2016 and 2017 and finishing second in both 2018 and 2019 when Blake, then in the role of assistant manager, was in charge.

“We are really looking forward to this first Nations’ Cup of the season in Deeridge,” Blake commented. “I am new to the job and delighted to get this opportunity. We have named a very experienced group of riders with some new horses that we are looking forward to evaluating.

“We are planning to compete in up to 20 Nations Cup’s this year and again will be looking to broaden our base of horses and riders. The new EEF Series, which replaces the former FEI Nation’s Cup Europe Division 2, will also give some new riders and horses a chance to compete at this level.”

At home, Sunday’s round of the TRM/Showjumpers Club spring tour, which was due to take place at JAG Equestrian in Co Kildare, has been postponed due to the weather forecast and has been re-scheduled for Wednesday, April 8th.

Away from the competitive action there was good news this week for Ireland’s senior eventing team as sponsorship has been secured from Chivers in the countdown to the Olympic Games in August.

The eventers became Ireland’s first team to qualify for Tokyo when they claimed team silver at the 2018 World Equestrian Games in Tryon, North Carolina where Padraig McCarthy also won individual silver. Last year, a member of the same team, Cathal Daniels, won individual bronze at the European Championships in Germany.

Chivers is part of the Boyne Valley Group, official food partner to the Sport Ireland Institute where many Irish equestrian athletes have been training as they prepare for the Games.

The FEI’s Jumping Director John Roche, who has played a key role in equestrian sport’s global governing body since first joining the Federation in May 1987, will retire at the end of this month.

From Foulksmills, Co Wexford, Captain Roche served in the Irish Army Equitation School and represented his country at top level on the international jumping circuit.

His FEI career started in the Sport Department while he was promoted to the position of FEI jumping director when it was created in 2007. He also held the titles of FEI Jumping World Cup and FEI Jumping Nations’ Cup director and director general stewarding. During his long years at the helm with responsibility for all aspects of the discipline, he has contributed to the growth of jumping from 340 international events to almost 1,800.