Initiative to get more women out fishing, and water safety lessons for all 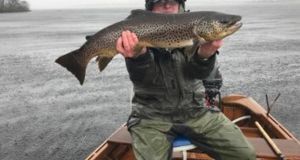 The first catch and release salmon of 2020 has been caught on the river Drowes in Co Leitrim. Nash McDaid of Ballybofey, Donegal landed the 5.4kg salmon at the Point of the Meadow on a Red Flying “C” at 2.45pm on Friday, February 14th.

Inland Fisheries Ireland (IFI) awarded €250 prize money to the angler for the first catch and release salmon of the new year. The prize was only eligible for the release of the fish which was handled correctly and verified by fisheries officers.

Dr Byrne, IFI’s chief executive, said: “I would like to congratulate Nash McDaid on the first catch and release salmon of 2020 and would urge anglers to step up their conservation efforts and to engage in catch and release angling. Salmon populations have plummeted in recent years with the number returning to Irish shores decreasing by over 70 per cent, which is very concerning.”

Opening weekend of the trout angling season on Lough Corrib got off to a slower than normal start with Storm Dennis curtailing activity. Nevertheless, a few hardy anglers braved the elements for the customary opening day rituals.

In the Oughterard area, Gerry Molloy landed an excellent fish of about 12lb which he sportingly released along with another of 2lb. The Cong Club hosted its opening day with a turnout of four boats for eight trout. Evander Brennan landed the best fish of 2.2lb.

“A good evening was had by all in Lydon’s Lodge, Cong,” according to Declan Gibbons.

In an effort to entice women to participate in fishing, one of the world’s leading fly casting instructors, Glenda Powell has partnered with IFI to teach participants at various locations around Ireland from April to September of this year.

The course will be a mixture of spinning and fly fishing while deciding which method suits best and participants will be encouraged to progress at their own pace while feeling safe in or around water.

Those wishing to progress to the next level will have the opportunity to sign up for future programmes and/or to join a local angling club. Each course will consist of half-day sessions, 9.30am-1pm or 2pm-5.30pm on Saturdays.

The programme is open to women aged 18 and over. Booking is essential. For further information, including venue dates, see fisheriesireland.ie/women.

Safety on the water

Members of Howth RNLI’s community safety team were on hand to offer water safety advice at the angling exhibition in the National Show Centre in Swords, last weekend. A wide range of safety devices including personal locator beacons and communication aids were on display at the stand.

Visitors could bring their lifejackets to get advice about upkeep and maintenance. Of the 12 inspected, three had serious issues rendering them completely ineffective in an emergency, and the other nine had expired firing heads.

Being prepared and wearing a suitable lifejacket gives a casualty time for the emergency services to reach them. Each year approximately 1,200 anglers are rescued around the coast of Ireland and the UK.

If any angling, sailing or water sports clubs would like a member of the sea safety team to give a presentation and carry out a free lifejacket clinic, contact John McKenna at csohowthlifeboatstation@gmail.com.

Correction to last week’s notes. Email address for charter skipper and tuna-licenced Peter Power, based in Mullaghmore in Co Sligo, should read peterpower-prospector1@gmail.com.