Railway looking to build on their European experience 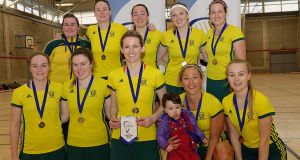 Railway Union take to the Porto boards for the women’s EuroHockey Indoor Club Challenge I with a squad that could lay claim to being the most multitalented Irish sporting line-up ever to come together.

Not only does the side have an aggregate total of well over 100 senior hockey medals between them, they can also count in their number a ladies football All-Ireland winner, a national track cycling champion, three international cricketers, nearly 200 Irish outdoor hockey caps and, in captain Holly Jenkinson, a netball and tag rugby international.

“It’s just a group of very talented athletes, serious high-achievers!” Jenkinson said ahead of the event which begins on Friday morning.

It will be their second European campaign at this level, the previous one ending in gold in Bratislava in 2011.

Back then, Jenkinson joked their best hope of silverware was the Fair Play Trophy, but improving performances and some serious group stage fortune put them in the frame to win the title for real.

The likes of Cecelia and Isobel Joyce, Kate Dillon, Kate McKenna, Orla Fox and Hannah de Burgh Whyte are also still going strong from that vintage while Emma Smyth – an outdoor star for club and country – now offers her intricate skill-set to the mix.

“I don’t know whether I should be proud or embarrassed but our average age is 31,” Jenkinson says of the experience in the panel. “We have been playing together as an indoor team consistently for a long time but also on the outdoor stage [for over a decade].

“Playing with the same group of really good friends outside of hockey as well is one of the main reasons we keep going.”

They start their campaign against Swedish side Partille (12pm) before facing Georgia’s Ukimerioni Kutaisi (5.30pm).

Saturday morning begins with a tie against host club Grupo Desportivo do Viso before the event splits into top four and bottom four, promotion and relegation pools.

“Going in, we have no real idea what to expect. In 2011, the standard was very varied and the Slovakian side [KPH RACA] were probably better than us but we got favours from others which got us into the semi-finals!

“Now, the standard seems to have improved even if it still the C division. In Ireland, there are now lots more people playing indoors and a lot more actually getting good at it with the U-14 competitions, the Pro Series Indoor and the international setup.

“There was six or seven of us who were part of that training panel so we got lots of extra sessions under our belt with Dave Passmore.

“As individual players, we learned more about the game, different strategies and can bring that now to club level – a lot of things from our warm-up to our formations and strategies are similar to the Irish squad.”

To that end, Irish manager Gareth Myburgh has been co-opted to coach the side in Portugal and ambitions are far less modest than 2011.

“Because of the unpredictable nature, we have smaller, mini-goals for each game and re-evaluate each time but overall, we definitely are setting our sights high to look for gold and promotion.”