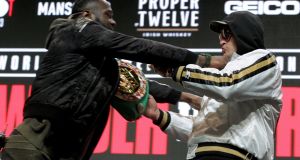 Deontay Wilder and Tyson Fury get into an altercation during their press conference at the MGM Grand Las Vegas. Photograph: Getty Images

The relative pleasantries that have marked the build-up to the hotly anticipated rematch between Deontay Wilder and Tyson Fury for the WBC heavyweight title were dramatically brushed aside on Wednesday afternoon at the MGM Grand Garden Arena during the final press conference before Saturday’s fight.

After a five-minute staredown between the fighters bubbled over into a shoving match the required the intervention of security, Wilder taunted Fury over his very public battles with addiction and bipolar disorder that prompted his 31-month exit from the sport and the surrender of the championship belts he won from Wladimir Klitschko in 2015.

“Don’t he dare to say that he got me into big-time boxing,” Wilder said, bristling at Fury’s suggestion the American was not a commercial attraction until the pair first met in December 2018. “If he does, I’ll slap him.”

Wilder continued: “Don’t you ever forget that when I found you, you were strung out on coke. You were like a big house, contemplating killing yourself. Don’t you ever forget who brought you to big-time boxing. I brought you back, dragged you back, I put food on your table for your family to eat and I’m doing it again for a second time. I’m the one who sells the pay-per-view and tickets. They come to see me.”

Fury was quick to parry Wilder’s attacks, saying: “And that’s the man you take on? A man thinking about killing himself? You thought you were getting an easy victory, didn’t you? Well it didn’t work out: I came back and kicked your arse all over.”

Whether it was played up for the cameras – which broadcast the moderator-led, panel-style discussion live on ESPN2 and Fox Sports 1, complete with commercial breaks that left the media members in the gallery doubling as a studio TV audience – only the fighters and their teams can say.

But the extracurriculars that preceded the hour-long sitdown on the floor of the 17,000-seat arena where Saturday’s fight will take place was a break in the mutual respect the fighters have shared since they fought to a highly entertaining split draw 15 months ago in Los Angeles.

“Wilder is very nervous. I can see his jumper going in and out from the big heart beat pounding out of his chest,” Fury said. “He’s terrified. He’s nervous as hell. He doesn’t know what to expect, and he’s getting knocked out.”

Earlier Wednesday, the Nevada Athletic Commission appointed the veteran referee Kenny Bayless as the third man for Saturday’s main event and the American trio of Glenn Feldman, Dave Moretti and Steve Weisfeld as the ringside judges.

Fury, who has been very public on his intent to end the fight inside the distance, said he took no objection to all three arbiters being from the United States, saying: “Kenny Bayless is a top referee. He has refereed me before and he did a good job. I have no objections with the referees and judges, whoever they are they are, they will do a good job.”

“It’s been no secret that I’m looking for a knockout. That’s why I hired (trainer SugarHill Steward) and went back to Kronk. He gets you to sit down on that big right hand, and that’s the game plan.”