Tyson Fury’s best chance is to do what Ali did better than anyone: dance 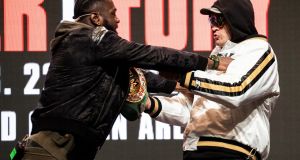 Tyson Fury says his rematch with Deontay Wilder in Las Vegas on Saturday night is the biggest fight in 50 years. One of his promoters, the octogenarian Bob Arum, compares it to “The Fight Of The Century”, between Muhammad Ali and Joe Frazier at Madison Square Garden in 1971. If hyperbole were manure, the garden of boxing would flower forever. Amnesia helps to water it.

If we’re looking for comparisons, we need to go back a few years beyond that crazy night in New York in 1971.

It was another February, in Miami Beach in 1964, when Cassius Clay, “shook up the world” to de-fang the Ugly Bear, a sullen champion of indeterminate vintage who was the Mob’s pet and regarded as unbeatable, as well as unsalable: Charles “Sonny” Liston.

[Wilder] can’t just rely on one big punch. He’s having more and more trouble over the years

Nobody wanted anything to do with Sonny – except the 22-year-old challenger from Louisville, who roared into town like a clown who’d stolen a bag of LSD, with Malcolm X and the Nation of Islam in tow. He left Miami with the title, a bemused worldwide audience of millions and two new names: briefly Cassius X, then Muhammad Ali, the one that would illuminate the remaining 52 years of his life.

There have been loudmouths in boxing from the 19th century days of John L Sullivan, but nobody mouthed as loudly as Ali. He bamboozled the ogre with a pre-fight performance that bordered on the insane. So animated was he when screaming at Liston during the weigh-in – “After I beat him, I’m going to donate him to the zoo!” – that his pulse rocketed from 54 to 120. Legend has it doctors considered not allowing the fight to go ahead, so fearful were they he would die in the ring.

Ali did not die. He would go on to be the pre-eminent sporting celebrity of the 20th century; there ought to be no arguments about that, whatever the merits of other contenders – including Fury and Wilder.

Certainly Fury also creates noise where none existed; once, he paraded in front of Wladimir Klitschko dressed as Batman. He has turned down the dial since his comeback from a 31-month rest from business but, as he showed this week, he is capable still of routines that would earn him a living at the end of Bognor pier.

And, while his feet are not quite as fast as his tongue, he shares Ali’s gift of salesmanship. He also will finish his career way richer than the Greatest did.

When Fury signed an $80 million (€74m) multi-fight deal with ESPN in February last year, with a single swish of a pen he equalled Ali’s entire career earnings, much of which disappeared. Only Canelo Alvárez’s $360 million deal with DAZN and Floyd Mayweather’s $240 million contract in 2013 for six fights with Showtime outstrip Fury’s. And he is not even a world champion.

Fury does not claim to be another Ali; and Wilder (whose inspiration was Ali) is no Frazier, no Liston either. But, in the 14 months since their draw in Los Angeles, they have generated more interest than any other recent fight in the business. Certainly, it should be Fight of The Month.

“I came into boxing to make a few dollars for my daughter,” Wilder said this week, referring to Naieya, who was born with spina bifida 15 years ago, when Wilder was working for tips as a waiter in his native Tuscaloosa, Alabama. “I never thought about being heavyweight champion of the world.”

Since he began fighting for money and family – he has gone on to have seven more children – Wilder has grown into the most feared puncher in the division, with a knockout rate of 95.35 per cent. Only Bermane Stiverne and Fury have gone the distance with him in his 43 bouts. Those are scary numbers.

It should be remembered, though, that Wilder was a red-hot favourite to beat Fury when they contested the American’s WBC belt and Fury’s Ring and linear championships at the Staples Center in December 2018.

There’s hardly a member of the boxing community who hasn’t chipped in with an opinion this week, but Dillian Whyte struck a chord with a simple observation on Sky (although BT Sport have the UK TV rights): “[Wilder] can’t just rely on one big punch. He’s having more and more trouble over the years, because people realise: ‘Okay, this guy’s a one-trick pony.’” True. But what a trick, what a pony.

Rematches often disappoint. Ali fought and beat Sonny Liston again, with suspicious ease and speed, 15 months after the first earthquake, in front of a few thousand sceptics in a sports hall in Lewiston, Maine, gangsters and the Nation lurking in the dark. It was a low point in his career. This rematch should be much better than that but there is every chance it will also end quickly.

For all the talk of roaring out of his corner at the sound of the first bell “like a raging bull”, Fury’s best chance of victory is to do what Ali did better than anyone: dance. If he does not, all the talk in the world will not prevent a most painful evening.