Kobe Bryant crash: Questions emerge about why helicopter was flying in fog

Investigators say no possibility, including a mechanical problem, has been ruled out 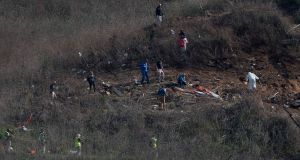 Investigators work at the scene of the helicopter crash in Calabasas, California. Photograph: Mark Ralston/AFP via Getty

The helicopter carrying basketball legend Kobe Bryant on Sunday morning circled over a golf course in Los Angeles’s Griffith Park, awaiting clearance from air traffic controllers to continue its flight into the hills. The weather 88km south in Orange County, where the helicopter had departed less than an hour earlier, had been fine – 6km visibility. Bryant had routinely made the same flight from his home on the coast to the Camarillo airport, near his basketball academy north of Los Angeles.

But now, up ahead, a fog so thick that it nearly blinded drivers on the motorway enveloped the hillsides near their destination. Visibility was so poor that the Los Angeles police had grounded its fleet of helicopters. The pilot had a decision to make, one that might have proved fatal.

Turn around? Begin flying on instruments and head to a safe airport? The pilot, who by all accounts had a sterling safety record and was licensed to fly in inclement weather, kept going. Sometime after its last contact with air traffic controllers at 9.45am, the aircraft slammed into a hillside at 1,085 feet (331 metres).

On Monday, investigators were trying to figure out what went wrong, and they emphasised that no possibility, including a mechanical problem, had been ruled out.

“We take a broad look at everything around an investigation, around an accident,” Jennifer Homendy, a member of the US National Transportation Safety Board (NTSB), said at a news conference on Monday afternoon. “We look at man, machine and the environment, and weather is just a small portion of that.”

The helicopter was not carrying a cockpit voice recorder, and investigators have been searching a debris field of 150 metres, trying to recover perishable evidence, Homendy said. Federal officials are not expected to reach a conclusion about the cause of the accident for months.

Asked on Monday whether the crash had been survivable, Homendy replied: “It was a pretty devastating accident scene.”

Like many celebrities and business tycoons, Bryant had long moved around southern California by helicopter to avoid the region’s famous traffic. During his career with the Los Angeles Lakers, he would often fly to games downtown. On the day of the crash he was on his way to a special event, a basketball tournament he was coaching at the training camp he had co-founded in Calabasas. On board with him was his daughter Gianna (13), a star player who many predicted had a future in the Women’s NBA.

In addition to Bryant and his daughter, the crash also killed two of her teammates; an assistant coach; the helicopter’s pilot; and three other adults, one of whom was a college baseball coach.

The morning flight out of Orange County, close to Bryant’s home on the coast near Newport Beach, was uneventful at first. When the helicopter reached Burbank, where the foothills rise above the Los Angeles basin, controllers kept the aircraft circling for 12 minutes, clearing other traffic, according to the NTSB.

They then issued a special visual clearance for Bryant’s flight to pass through their airspace under less-than-optimal visual conditions. The assumption was that the pilot would maintain legal clearance from clouds, or seek clearance to fly on instruments, after that, a Federal Aviation Administration official said.

My first thought was, ‘What in the world is a helicopter doing out here in this fog?’

But there were no further communications, until witnesses called the emergency services at 9.47am and reported the sound of whirring blades, broken fibreglass and a massive fire on a hillside.

The fog on Sunday morning near the scene of the crash was “as thick as swimming in a pool of milk,” said Scott Daehlin (61). He was retrieving sound equipment for a Sunday service at his church in Calabasas when the sound of a helicopter coming low and loud through the thick marine layer caused him to look up.

“I couldn’t see anything, not even a silhouette,” he said on Monday morning as he looked across the street where the steep mountainside rose. The grassy slope was littered in wreckage. “My first thought was, ‘What in the world is a helicopter doing out here in this fog?’”

For about 20 seconds, he said, he followed the sound of the helicopter as it swept over the church parking lot and south toward the crest of the Santa Monica mountains. It sounded even and normal, but, he said, “it sounded too low.”

It turned out that the pilot, Ara Zobayan, who had held a commercial licence since 2007, had not obtained a clearance to fly under instrument flight rules, which would have allowed him to navigate with the use of his instruments, officials said. – New York Times

1 A beautiful, happy accident - Moneyball is the best sports movie ever
2 Nicholas Quinn: ‘Swimming became how I dealt with grief’
3 Reality Bites – Tales from the new normal: Caitríona Cormican
4 Tokyo Olympics likely to start on July 23rd 2021, reports
5 Is it time for the New England Patriots to tear it down and start again?
Real news has value SUBSCRIBE