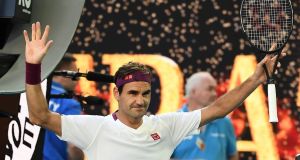 Roger Federer has had many improbable victories in his career, and a smattering of unusual defeats, but his passage into the semi-finals of the 2020 Australian Open – where he will face Novak Djokovic – after three-and-half hours of undiluted drama against Tennys Sandgren was in another dimension.

On his way to his second great escape of the week, the six-times winner of this title and owner of a record 20 majors had to save seven match points, received a rare code violation for swearing, snarled at one of the game’s best chair umpires, Marijana Veljovic, then made the most of his luck when Sandgren was within sight of victory and injured his right knee in a collision with a ball girl.

“Got to get lucky some times, I tell you that,” Federer said courtside. “Those seven match points I wasn’t under control. I was hoping he was not going to smash the winner. He played his match. I got incredibly lucky. As the match went on, I started to play again. I don’t deserve this one, but I’m standing here and I’m very, very happy.”

Commenting on his medical timeout, he said: “I’ve played a lot of tennis. Sometimes you feel a bit funny. I started to feel my groin, my leg was tightening up. I don’t like to get the trainer, show weakness and all that. It wasn’t bad enough it was going to get worse, stiff tight. I don’t even know what time it is. Draws are not getting easier. But you never know. You play without expectations because you know you should probably already be skiing in Switzerland.”

Yet he is in his 46th grand slam semi-final, more than anyone in modern times.

They see-sawed on level terms for the first three frames but the conclusion to the fourth set was excruciating, drawn out like a German opera, one chorus drowning another.

On Friday, Federer came from 4-8 down in the super tie-break to win six points in a row and break John Millman’s heart in the fifth set. Here he was one point from leaving town after two-and-a-half hours. Somehow, he worked his way into a tie-break.

At the changeover on three-all, a ball girl ran into Sandgren and he suffered a bizarre knee twist. Strapped up, he resumed and toughed out a 6-3 lead for three more match points, with Federer serving. Surely he would not be denied again. He found the net with a backhand for 6-4; two chances left. Federer served and saved for 5-6. Sandgren’s destiny was in his hands once more. Federer fashioned parity with a controlled volley. Sandgren got another match point with a big serve down the T. Federer, back on serve, stretched out a long rally, and Sandgren cracked again. Federer smashed a winner, a point from safety.

Sandgren aced for the 24th time and 8-all, then shoved a forehand into the tramlines. Federer served for the set again. Sandgren hit long. Job done.

The fifth was an anti-climax.

John McEnroe aka the Comissioner of Tennis is back and he's got a request for @SerenaWilliams 🙏 pic.twitter.com/3TeKa8JS2B

At break point in the third game of the third set, Federer was heard to mutter to himself: “Fucking …” The line judge reported it to the chair umpire, and Veljovic gave Federer a code violation for an “audible obscenity”. “What did I say?” Federer inquired on the changeover. “I can’t repeat that,” she said. “You don’t know?” he said. “No, I heard it kind of. But she heard it very clearly.”

While Sandgren looks like someone who has just walked out of a jungle after 40 years, Federer remains the consummate stroller. You know he’s happy with his game when he ambles; if he’s anxious, there is a quickening of the step, perhaps an extra bead of sweat. That was all on show on Tuesday.

After his near-meltdown against Millman, he expected the engine to be purring again. It clunked like an old banger. “The wheels have come off, no doubt about that,” John McEnroe observed when Federer returned from his medical timeout at 6-3, 2-6, 0-3 and serving after an hour and 28 minutes.

Ten times, Federer has come from 0-2 down to prevail. Although he won the first set here, he lost the next two and was broken in the fourth. Four years ago at Wimbledon, Marin Cilic had three match points against him, and Federer came back to win. In 2003, he saved seven match points against the Australian Scott Draper in Cincinnati, and won. This man gets out of jail the way other people get out of bed.

Except he is finding it more difficult to win long matches. He went into the Millman match having lost three five-setters in a row. Now he was red-lining against an opponent who said beforehand: “I tend to lose to guys before I play them. Their record, the amount of matches they’ve played against guys that are top 20, top 10 are silly. I’ve played a lot of tennis in front of very few people. I wasn’t supposed to be here.”

And then he wasn’t. The deciding set was the grind he and everyone else knew it would be. He’d had his shot. Federer, determined not to lose rather than convinced he could win, found some more genius, and willed himself over the line.

But Sandgren left to the biggest round of applause he will ever receive in his life – louder, probably, than if he had beaten the crowd’s perennial favourite.

Next up Federer will face Djokovic who paid tribute to Kobe Bryant as he continued his march through the Australian Open draw with a straight-sets victory over Milos Raonic in the quarter-finals.

Djokovic was good friends with the basketball star, who was killed in a helicopter crash on Sunday, and he came out for the match on Rod Laver Arena wearing a jacket bearing the initials KB, Bryant’s numbers eight and 24 and a heart.

Nick Kyrgios had spoken after his defeat by Rafael Nadal on Monday about being inspired by Bryant, and Djokovic certainly looked like a man on a mission in a 6-4 6-3 7-6 (1) victory.

The defending champion broke down as he spoke about Bryant afterwards, saying: “I don’t know what we could say. It really caught us by surprise.

“He was one of the greatest athletes of all time, he inspired myself and many other people around the world. I had that fortune to have a personal relationship with him over the last 10 years.

“When I needed some advice and support, he was there for me. He was my mentor, my friend, it’s just heartbreaking to see what has happened to him and his daughter. It’s unbelievable.”

The only real concern on court for the defending champion came in the third set when he began to experience problems with his contact lenses.

Djokovic took a medical timeout and looked flustered as he continued to seek help from the trainers but that did not stop him finishing off the match in a tie-break.

Raonic had not lost a set all tournament, defeating Stefanos Tsitsipas and Marin Cilic in the last two rounds, but he took a 0-9 record against Djokovic into the contest and soon found his mighty serve under huge pressure.

The Canadian frustrated Djokovic by saving eight break points but he finally took one to claim the first set.

The second seed broke serve again in the fourth game of the second set and, although Raonic managed to hold through the third, the tie-break was one-way traffic.

Djokovic now moves through to a last-four clash with his old rival Federer.

Looking ahead to the meeting, Djokovic said: “Obviously tremendous respect for Roger. He’s been one of the all-time greats and definitely one of my two biggest rivals. The match-ups against Roger and Rafa have made me the player I am today.

“I hope to get to at least one match point. It was quite amazing what he has done on the court today. It’s not the first time, that’s why he is who he is. Let the better player win.”