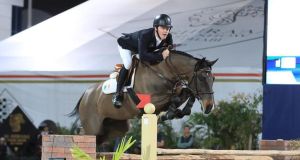 Mikey Pender winning the Derby at Abu Dhabi on Friday with HHS Fortune.

Kildare’s Mikey Pender rounded off his trip to Abu Dhabi in the United Arab Emirates with a third-place finish on Saturday in the night’s four-star Al Shira’aa Longines Grand Prix.

Twenty-year-old Pender was one of 12 riders who contested the second round of the 1.50m-1.60m world cup class and one of four to record a double clear. In the jump-off, he briefly held the lead when stopping the clock on 39.88 seconds with the Hughes Bravo Ltd-owned Irish Sport Horse gelding HHS Calais, a nine-year-old by Cavalier Royale.

Ultimately, that time was only good enough for third as Germany’s Christian Ahlmann topped the final leaderboard with Solid Gold Z (39.16) ahead of Egypt’s Abdel Saïd riding Arpege du Ru (39.49). Britain’s Chad Fellows posted the only other double clear on Vinci du Beaufour (40.24).

On Friday, during this last of three international shows in January at the Al Shira’aa equestrian centre, Pender partnered Marion Hughes home-bred nine-year-old Catoki mare HHS Fortune to land the 1.40m Derby and win the first car of his career. In the earlier 1.45m Grand Prix for riders under 25, Kilkenny’s Jack Ryan (18) continued his good start to the season when recording the faster of just two double clears with the Kennedy Bros Sport Horses-owned KBS Major Player, an eight-year-old gelding by OBOS Quality 004.

Tottenham give 550 non-playing staff a 20 per cent pay cut 12:14
Sky Sports customers save on bills; rule changes could change rugby utterly 07:25
Uefa meet to re-evaluate hopes of finishing current season 06:48
Gerry Thornley: Changes to tackle laws could transform rugby by time of next World Cup 07:18
Five newly-released sports books to read over the coming weeks 07:31
Here is your handy guide to sport on television this week