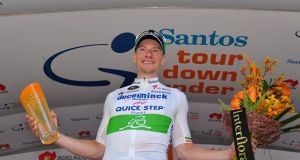 Sam Bennett of Ireland after winning the opening stage of the Santos Tour Down Under. Photograph: Getty Images

In his second day of racing in 2020, Sam Bennett clocked up win number one of the season when he blasted to success on the opening stage of the Santos Tour Down Under in Tanunda. Bennett received a perfect leadout from his new Deceuninck-QuickStep team, and while rival Jasper Philipsen (UAE Team Emirates) gained a slight advantage when he launched his sprint first, Bennett had the strength to finish over half a bike length clear.

“I’d be lying if I’d say I didn’t feel the pressure to get that first win,” the Carrick-on-Suir rider said afterwards. “I am very happy it came today, on the very first stage of the season’s first [STAGE]race. I can’t thank my incredible teammates enough, because the result is down to their amazing effort.”

Bennett’s victory is his first-ever stage win in the Santos Tour Down Under, and catapults him into the race lead. With the stage time bonuses taken into account, he is now four seconds clear of Philipsen in the overall standings, and six clear of third-placed Erik Baska (Bora-hansgrohe).

Bennett moved to Deceuninck-QuickStep over the winter in order to act as its number one sprinter. He had played second-fiddle with his previous team Bora-hansgrohe, but will get priority with the Belgian squad. He was helped by his teammates in the finale, with the Kiwi Shane Archbold and the Dane Michael Mørkøv completing the final leadout.

“The team is very confident in me and the way they rode was amazing and gave me great confidence,” said Bennett, the Irish national champion. “There’s a lot of experience in this squad, and they showed it today. Everybody did a fantastic job and played a superb role, keeping me in position and making sure I was where I had to be in order to fight for the victory.

“The week has just started and I hope other good results will soon follow.”

He is the first Irish rider to lead the Santos Tour Down Under, cycling’s first WorldTour race of the season. Wednesday’s stage covers 135.8 kilometres between Woodside and Stirling, and has a finale which could again suit Bennett.